Metropolitan Mayhem is a new concept by Aymeric Nocus, Mikko Sandt, Merlijn van Oostrum and MetHunter. Quite often you“ll read people using a proper noun as an adjective, for example "this is a Roch-styled map" or "a 3DR look" etc. Well, from now on this episode“s name deserves to be used in the same way. This is because when a player is looking for something to play, they are usually locked into a defined range of varieties that go from time-restricted community build projects to huge TCs. Metropolitan Mayhem is situated halfway between; the closest thing I recall is Duke is Ten but this episode is of a far higher quality and blending. It's a 15-map episode, with a look and feel that resembles the original game in its purest conception. There are no tricky puzzles, no new weapons or enemies. Basically, no complicated stuff of any nature, and that, my friend, is its wild card. 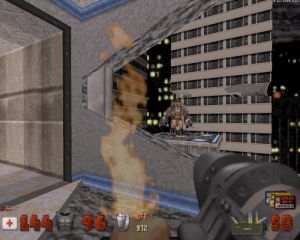 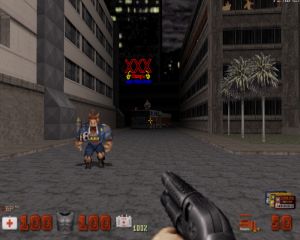 Let“s gut this masterpiece to understand why it's so good:
-Duke“s day: The introduction level for this episode is a déją vu city map that does its job of setting the player in the mood of the game. I say déją vu because the author borrowed a few chunks from the original maps (Hollywood Holocaust and Red Lights District). Everything is gifted with its own feature, though. So, I had to be told about those influences. A seven-minute ride where jumping will be well rewarded.
-Croque Monsieur (from french: Mr.Chew): Continuing in the fashion of the first map, this one is a little more open for fights and everything is connected by a main street area. With the exception of a few terraces, nothing escapes from the first map“s theme: a cinema, a karaoke bar and a porn store.
-Office Onslaught: As its name implies, this map is an office complex. The most straightforward layout and squarish design blend with strong lighting and flawless texture combinations, which means the map lines up with the 3DR school perfectly. Gameplay at this point is totally even between levels.
-City Lights: This is the most modest thing you“ll ever see done by the Master of Horror, Merlin van Oostrum. However, it happens to be that Merjin has set his bar too high, which means that this map is actually pretty good, not to mention that Melrin has respected the project“s restrictions and therefore built his map accordingly. Design is a little more adventurous than in previous maps; you“ll see things that remind of maps like OGBB or Roch Island but with a modest conception that reflects the episode“s spirit. Tougher enemies are introduced to sharpen the difficulty.
-Sex City: So far the cherry on the cake. This is, in my opinion, the best map of the episode; its layout has been done in such a great fashion that you have to make your way in two different directions that lead to the same point. At this point, the level becomes linear but only until you reach the next junction where making a choice is mandatory, again. The amount of enemies is increased so be careful because every advance you make will fuel their rage.
-LAPD: A police station featuring everything you could expect from such a place. Interrogation rooms, cells, a central command room with viewscreens, etc. Design quality is again shifted by strong lighting and a 3DR look. What mostly makes this level interesting is that there seem to be two ways to approach it. One is more evident but the other is the correct path. Fights are cool as the enemy count is high but it's also the amount of places that provide cover and a tactical advantage.
-Submerged Zone: A flooded city full of aliens. Once you find the Scuba Gear, you“ll be a mix of Aquaman, Spider-Man and Duke, exploring flooded rooms, gaining access to rooftops, jumping between buildings and cliffs and, of course, kicking the shit out of any aliens getting in the way. The perfect break from ground combat.
-Meatball Sub Makin“: This map has been stuck within this episode with a quite questionable criteria. While the map is very good and pretty classic style, it stands out because the whole episode is much more classic. In this map everything looks and feels bold and audacious for the episode“s standards. Layout is complex, firefights are tough and many players will spend more time on this map than they spent on all the previous maps together. For further details you can read the map's review here.
-Derailing: Being so far into the episode, players shouldn't wonder that this is where the fights are definitely for men. The classic feel is back as you make your way through heavy-weight enemies such as Battlelords and Commanders. That“s once you gain access to the train station, where things become daring again. This building shares nothing with the classic style but it“s so beautiful that I didn't mind this time. A couple of save/load attemps will be needed by the average player since there is one unfair fight that requires a lot of precaution.
-Train in Veins: Since the arrival of Blood back in 1997, Duke mappers have been tempted to make train maps. A few let the impulse invade them as you can see from maps like Mars4! and West Alien Train but nobody up to this point (15 years later) has managed to create such a feel of a real train. MRCK goes to an extent of making a train that doesn“t look like a huge transatlantic ship and at the same time isn“t too cramped. It's just beautiful to stare through the windows and watch the landscape fly past, and the wagon design itself is rather impressive as well. The only snag is the layout, which is as linear as going from the rear wagon to the front one. I“d have thought of implementing some backtracking for a change.

The following are four different ending maps, pretty much like those books named "choose your own adventure":
-High-Altitude Face-Off: So far the best way to finish the episode. An Emperor standing on his hovering platform surrounded by buildings to which you“ll get to if your jumps are well measured. The perfect mix of rational and irrational impulses to beat the beast.
-The Bitch: Pretty cool alien map still in the vein of the game, an underwater boss fight is not something I have stumbled upon before so I enjoyed it as a map and as a novelty. It“s easier than expected though.
-Stadium Despair: Difficult layout for a boss map and chaotic gameplay makes for a strange way to end this episode. Almost everything prior this has been built in a completely different fashion so, while the map is very entertaining, it fails to conclude the idea behind Metropolitan Mayhem. It's good for an alternative ending but definetely not the one I“d choose if I could choose only one boss map.
-Yelldown Hellride: I can only tell you that this map starts in some kind of a Tron world with lots of turrets shooting at you. If you happen to get deeper into it, mail me something to fill this description.

(Note: There“s a secret map named Dukenpark but I“ll let yourself find it and make your own conclusions.)

Conclusion: When there seemed to be no more things left to be seen, these guys strike with an ultra classic episode in the vein of the original game. Most of these maps were done pretty quickly and do not alone represent a novelty, but the whole is greater than the sum of its parts. And as such, playing this episode will leave you with a great aftertaste, as if you were back in time, enjoying a classic game as it was 16 years in the past when joy was effortless and life easier. This also made me reconsider whether spending so much time on pretentious projects is worth it; after all, these maps do not even go beyond the old build limits or require anything that wasn't available when the game was originally released. 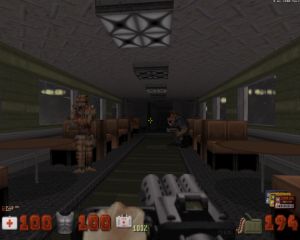 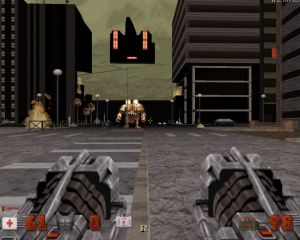 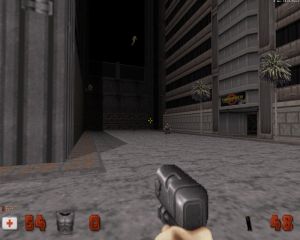 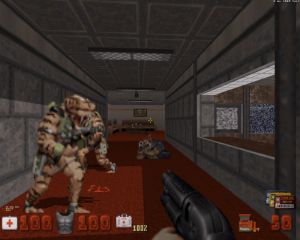