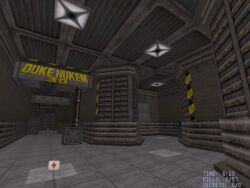 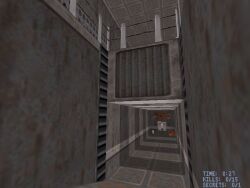 Duke turns ten and the Community celebrates by mapping, making sure that Duke survives another decade. The pack has seven small/medium size maps by six builders. The builders were given free hands with theme but it had to point to Duke's 10th anniversary.

Fakir begins with a ZDoom-type level. This is the best of the bunch although the gameplay is a bit too over-exposed to killing monsters. Texturing, design and general architecture follows a simple but very good looking theme. In map 2 Maarten V. Oostrum takes over with a simple ten-shaped city map with, again, lots of action. The first street section is my favorite part of the map and reminded me quite a lot of the street section in "The Spiegul Contest". Iggy comes twice. The first map is a bit too simple but the second one starts well and has a nice huge outdoor area which looked cool with a custom skybox I happened to have in my directory (NOT included in the package). James Stanfield, the dude who's been working on IW and Survival for the past years, comes forward with a nice small map that gets better during its second half. Gee's outdoor map is quite big and pretty but lacks in lightning and shadows and is a bit boring due to its gameplay which consists of blasting tons of monsters. Merlijn V. Oostrum, the wizard behind Red 4 & Red 5, ends the pack with a good looking city/boss map.

"Duke is Ten" is a great way to celebrate Duke's tenth anniversary. It features art by some of the best mappers ever to walk on the planet. They have not only given Duke a few more years but made the world a better place. 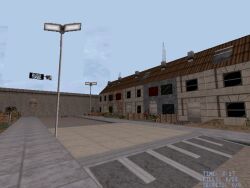 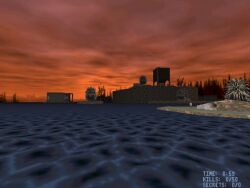