On April 29, 2013, two men of great vision and limitless talent stood on the edge of tomorrow, knowing the world of tomorrow would be different from that of yesterday. With a clarity of mind and boldness of spirit, they unleashed upon mankind a work of art that was destined to change the course of human history:

Various iterations of the main hall of the EDF Base, featuring design by both authors.

The idea of remaking Duke Nukem Forever, or at least some portion of it, in the Build engine had been floating around since the game was first announced. However, over the years no one actually dared to undertake such a project. When the actual game was finally released in 2011, fans kept asking where had all the cool stuff gone. The game was nothing like the 2001 E3 trailer. The motorcycle ride, the alien ship crashing into a tower, the donkey ride... Instead we got Duke playing with poop. Now, the game wasn't that bad; in fact, it was rather okay, just not the best game ever we had expected and hoped it to be. It felt like we were still entitled to all those cool things we had seen in the trailer. And that's where we come in. 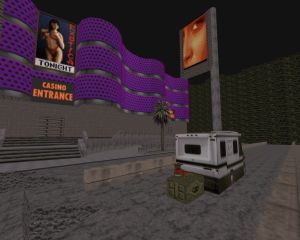 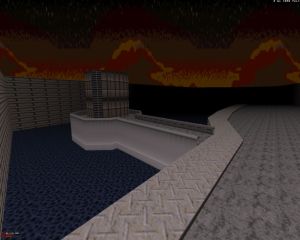 The Casino when it was still worked on by Mike Norvak, and the very first version of my damtop map.

In late summer 2012, Luciano "Gambini" Gallo approached me with the idea of making a mini-mod for EDuke32 that'd be based on the trailer. What he had at that point was an early version of the Morningwood (the Wild West town) map along with some assets (textures and sprites) he had made. There was also some new code (including the new "Pig Ape" enemy) by Dan "DeeperThought" Gaskill. At this point our goal wasn't particularly ambitious; the mod was supposed to have just three maps. I was supposed to build the Hoover Dam, which at that point was supposed to consist of just the top of the dam where Duke would fight a boss, ending the mod. We made no effort to recruit anyone else to join our team since that'd just complicate matters. Even DeeperThought had gone AWOL prior to my joining. 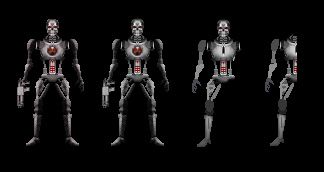 We took a break near the end of the year with Gambini focusing on his Half-Life 2 mod (which is still in development as of August 2016) and me being away from my apartment for the Christmas season. In February things started to move at lightning speed; Gambini had started two new maps (the Vegas and the mine) and had become very good at drawing new textures for the mod. The Hoover Dam also started to expand; first the underwater area of Lake Mead (the reservoir), then the power station at the very bottom, then the turbine area inside the dam, then the mountainway leading up toward the bridge and the final boss. I started hunting for photographs of the Dam on the internet, recreating everything. In addition to the locations mentioned above, there's the memorial, the intake towers, both (Arizona & Nevada) spillways, the penstock (the underwater tunnel that converts the gravitational potential energy of the reservoir into translational kinetic energy), the visitor center, the car park, the valve houses, even the bypass bridge in the distance. Basically everything in the map is based on the real-life location. Moreover, with DeeperThought still gone, I started to code, which I had never done before aside from some minor editing of existing code. The good & bad EDF troopers, the Terminator, the cutscenes and a lot more were coded in just two frustrating months consisting of lots of trial & error. DeeperThought eventually lent a hand with the tentacles and the M16 rifle. We got the exceedingly complex motorcycle code from Maxim "Lezing" Chinyakin and the voxels from Reaperman. I had been rather skeptical of the motorcycle ride from the beginning (there had never really been a great vehicle segment in any Duke3D mod) but it turned out to be one of the most memorable scenes in the mod.

Things were done for the most part by the beginning of April 2013. I had it with all the marginal improvements in early April and declared my work finished. Gambini put together a video that recreates nearly every scene from the 2001 trailer with footage from our mod. We considered it pretty cool but were caught by a surprise when the video spread even beyond the traditional Duke forums:

The weeks of April consisted mostly of fixing bugs, creating the intro & ending sequences (with a very primitive cutscene code), and having a beta of the mod tested. The EDuke32 team helped with some last-minute engine updates that solved some critical renderer-based visibility issues. Duke Nukem Forever 2013 was finally unleashed on April 30, 2013. The reception was pretty unprecedented: In 24 hours the mod went on to amass thousands of downloads at ModDB alone, and since a direct MSDN download link had been supplied with basically every news post, the actual download count was probably several times that. Many gaming websites (including PC Gamer, Eurogamer, Shacknews, Rock, Paper, Shotgun and Kotaku) and even some print publications mentioned the mod, and many posted playthroughs and reviews of it on Youtube. The last time such hype had surrounded a Duke3D mod was when Starship Troopers TC was released in 2000. The timing of the release couldn't have been better: Duke3D had been released on Steam only a few months before. While the mod, which uses the EDuke32 engine, doesn't support the Megaton executable (derived from Jonof's port), those with Duke3D on Steam have access to duke3d.grp, the only external file required to run the mod. Another factor that contributed to our success was the short span of time between the release of the trailer and the mod itself.

Most of all, many seemed to actually like the mod for bringing back that feel that was missing from the actual Duke Nukem Forever, a disappointment still fresh in people's minds. At its core DNF2013 was a simple Duke Nukem 3D mod, but rather than going full retro, it also managed to feel fresh and thus managed to make even some modern gamers give it a try. Still, there were some who could not understand our decision to work with 8-bit sprites and textures (some even thought this was due to a lack of ability even though Gambini has churned out professional-quality models for his Half-Life 2 mod, all by himself), and it was implied a few times that we should put together a more modern-looking DNF mod, possibly even in another engine, with models and hi-res graphics, just like that. Of course, ever since the project started we were not working on it with any intention of appealing to the masses. The mass-appeal came out of nowhere, which was a nice surprise, but we never had any intention of catering to anyone but those who could appreciate the mod for what it is. In any case, it was nice to know that for the first time in forever there were thousands of people playing Duke Nukem 3D. It probably wouldn't be too far off the mark to say the mod is partially responsible for the resurgence of interest in new Build-related products such as the upcoming Bombshell prequel and the 20th anniversary World Tour, to be released on Steam in October 2016. 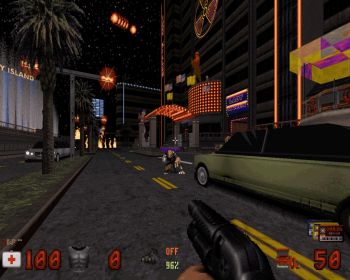 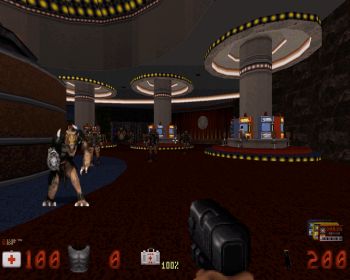 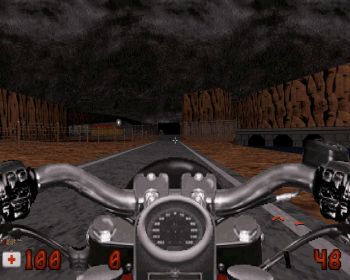 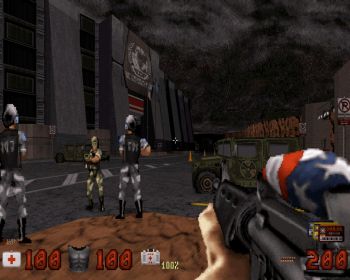 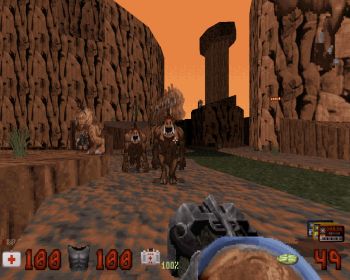 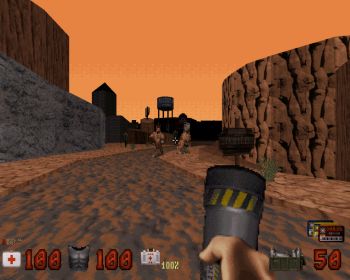 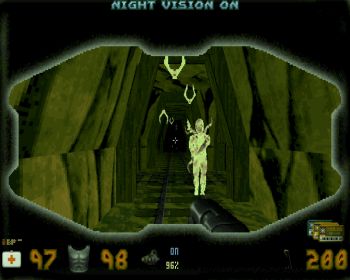 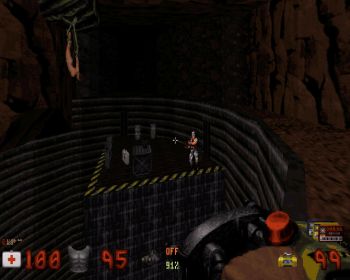 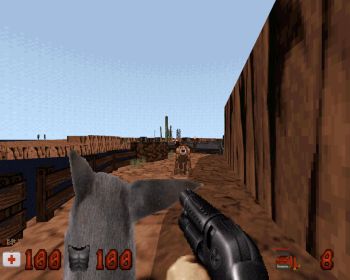 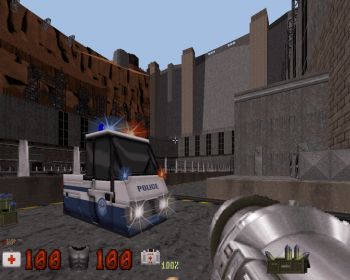 Several users have ran into technical issues when trying to play our mod. Here are the three most common technical problems, all of which result from the user not having properly read the supplied txt file (the installation instructions are at the very top of that file).

Problem 1: Starting a new game takes me back to the main menu.

Solution: You tried to launch the mod through _eduke32.exe rather than DNF.bat, which is the correct file.

Problem 2: Graphics are messed up/I'm getting the "hall of mirrors" or "melted textures" effect.

Solution: Either you're missing DUKE3D.GRP, which must be in the same directory as the mod, OR you did not install the mod into an empty directory. If you have Duke3D on Steam, see the readme for the exact location of the GRP file. Note that the GRP must be from the Atomic Edition, i.e., the four-episode version of Duke3D rather than from v1.3d, the three-episode version. The Steam and GoG versions of Duke3D have the correct GRP.

Problem 3: When I enter a map, there's a Village People poster on my screen.

Solution: You're trying to run the mod in Polymer, an unsupported renderer. Find your eduke32.cfg file, open it and find the line where it says Polymer = 1. Replace the 1 with a 0.

Solution: Do NOT try changing the supplied version of EDuke32.exe (intentionally renamed _eduke32.exe). Don't try to be too clever for your own sake by downloading the most recent EDuke32 version. The mod supports only one version of EDuke32 and that version comes with the mod.

Inspired by our great work, unworthy but useful minions Leonardo "DavoX" Pellegrini and Michael "Micky C" Crisp set out to recreate some of the other locations seen in the old trailers as well as some of the scenes from the released game. This "DLC" consists of three maps. In the first one, inspired by the 1998 trailer, Duke's vacation is interrupted by UFO attacks. At the end of the map Duke takes a rocket to Duke Dome, but it gets shot down by the alien scum. In the second map Duke takes his motorcycle to the streets and heads for the Duke Dome, where the last map takes place. The DLC is action packed and a cannot miss if you thought the original episode lacked content from the 1998 trailer. The motorcycle map is also quite epic in its scale and filled with close shave moments. 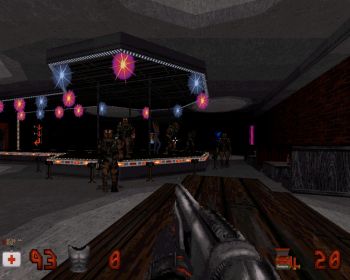 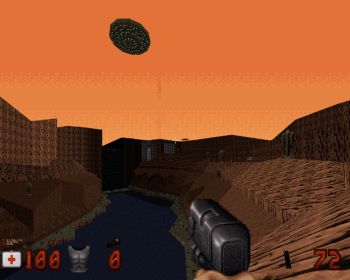 Born to Be Wild: 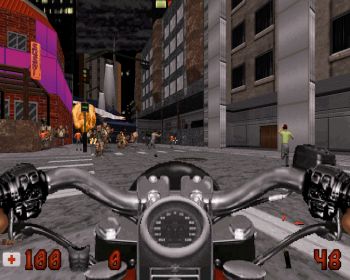 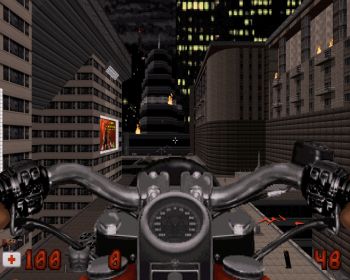 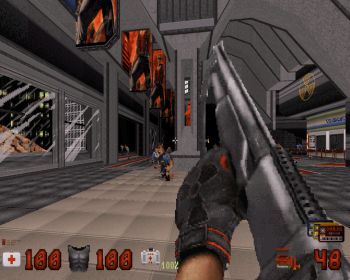 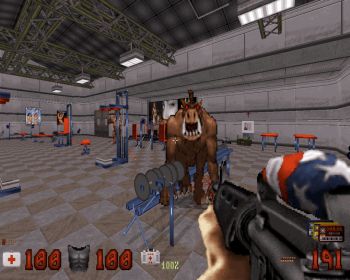