Design: It's awesome how someone can create huge city levels with tons of details when some people focus on details so much that they have to stick with tiny levels. It's a matter of taste of course. Sector details are actually replaced with sprites and well placed textures. If you look at the map in Build you'll notice the huge amount of sprites. Spritework is often used and it's very impressive. Lighting is quite good but some places could use better shadows (rooftop for example) although you really can't tell what time of the day it is by looking at the sky.

Textures: Texture theme is very similar to the one Maarten used in 'Toxicity'. Atomic/Plutonium textures weren't used and you won't miss them. Obviously 1.3d textures can do the job damn well when used well. Sky is gray which gives this level a bit 'dull' atmosphere but also some originality.

Gameplay: Gameplay is spiced with explosions, huge areas, non-linearity etc. Torn buildings remind me of 'Warz' (which is even mentioned in the txt so obviously it has had an influence to our builders). There are tons of monsters - even lots of Battlelords. Weapons are well balanced. For example I had to use Freezer against some Battlelords. This of course depends on what weapons you're going to find first (I never found the Devastator). Puzzles are quite simple but distances are quite long and level is partly un-linear.

Innovations: It's not a direct Roch copy or a Bobsp copy but it's a level which combines the skills of three different builders (although Maarten & Merlijn share the same style). There isn't anything new or outstanding. In fact 'OGBB' isn't much different from Toxicity. Oh - there's a new sound clip (Metallica) which fits but it's a bit too silent.

Conclusion: Well designed, big and partly un-linear city level spiced with explosions and some nice sceneries. Nothing outstanding or new - it's just another 'nice' city level. Those who love big open places and unlinearity can add at least three points more. 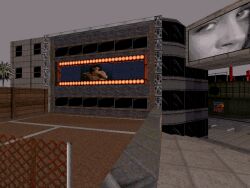 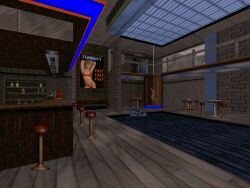