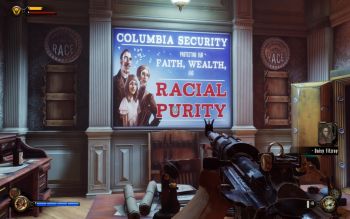 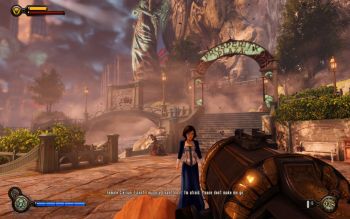 I started playing BioShock Infinite with mixed expectations. I found the previous two parts in the series slightly overrated and at the very low-end in terms of replayability, not least because of their length and combat that got increasingly tedious toward the end. Some of the potential of their underwater surroundings was also wasted on the games simply not using them, except for some very short but utterly tensionless underwater trips in BioShock 2. Infinite, however, turned out to be a 14-hour long triple-A quality game. I spent the first 30 minutes or so thinking if I'm in fact playing the best first-person shooter ever.

Infinite takes place high up, above the clouds in the city of Columbia, hidden from the sodomites that inhabit the land below. That this could take place in 1912 is explained with some Quantum Mechanical technobabble about suspending particles. (And that's not the only Quantum theory the game employs to tell its story.) The game looks incredible, not merely because of its graphical quality but because of the theme; while Rapture might have looked and felt a bit claustrophobic and old-fashioned, Infinite's Columbia is sunny and spacious, and thus more epic. More than that, this game has got to be the best optimized game ever; I was able to play it on high settings without getting any framerate drops despite running the game on a GPU (HD6870) that just entered its fifth year of service. Incredibly, map loading times never seemed to go above five seconds. It's not just the engine; Rise of the Triad which too runs on the Unreal engine gave a far worse performance despite its less ambitious scale.

Columbia is ruled by a self-proclaimed prophet whose ultimate objective seems to be to invade the land below. For this task he's been preparing a young woman named Elizabeth, who's being held in confinement, guarded by a massive bird-like machine. You break her free a few hours into the game and she joins you for the rest of the journey. Essentially she plays the part of the damsel in distress, someone you're meant to care about, but it's made clear early on that she can take care of herself and in fact ends up saving you more often than vice versa. She often throws you health, Vigor energy and ammo the moment you think you're screwed. In addition, she can open Tears, which bring assets from parallel worlds into yours to help you in tough situations. (This special power explains her confinement and grooming by the prophet.) Not only is she beautifully drawn, animated and voiced, but she also feels very life-like and never becomes a hindrance. You quickly start to consider her your responsibility and thus you begin to evaluate your successes and failures through her. When you seem to have failed her at one point later on in the game, it's a terrible situation to be in. (One particularly hopeless moment makes brilliant use of Pachelbel's beautiful Canon, a classical song usually associated with much happier circumstances such as weddings.) The story is really all about her but there are other characters and stories as well involving weird scientists, racism and revolution with revolutionaries behaving more like their French rather than American counterparts. The game's ending with its twists and interpretations is one of the best in games and easily the most impressive since Mass Effect 3. 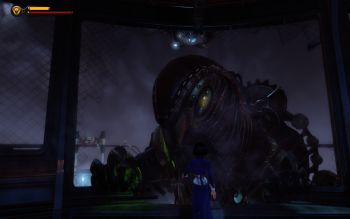 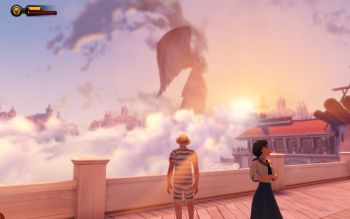 The lunatic fringe of PC gamers have accused the game of being linear compared to its predecessors and to whatever games this fringe used to play in the nostalgic '90s. (This same fringe sees nonexisting conspiracies everywhere and is matched in stupidity only by the ADHD crowd of Mountain Dew-drinking CoD kids.) This is true in the sense that there's less confusion about where to go than there was in BioShock; not only is the layout more linear but there's also an optional hint function that guides you toward the objective. This is an improvement; challenge should come from puzzles and combat, not from trying to find your way in a maze. At the same time the game's combat environments provide plenty of space to move around, set up traps, attack from above using the Sky-Hook, and establish defensive positions. There is still a lot of exploration in this game, all of which is more meaningful than hugging walls in Doom or Duke3D in the hope of finding a body armor. Many items that permanently boost your health and shield stats are hidden as are many of the game's audiologs that not only deepen the story but may also reveal further secrets. The health system is from Halo; you've got a regenerating shield and once it's gone, you start losing health which does not regenerate but can be replenished. It's a very good compromise that ensures the game flows constantly without becoming too easy or sinking into a tedious trial & error crapfest. On hard, I didn't die very often (maybe once every two hours or so) but the game constantly threw me into challenging situations where I was forced to utilize the game's numerous features to my advantage. There are other, more minor improvements too such as hitmarkers which I have always loved for the instant feedback they provide.

No game is perfect, of course; even FFVII had some stupid minigame mechanics. Often Infinite seems to have too much of everything from weapons to Vigor powers, from tears to dresses that augment your abilities. Vigors are the powers that used to be called Plasmids, and the vast majority of them still feel useless; or, rather, I just had no interest in trying them out except to quickly see what they were like, then resorting back to the Lightning Vigor, which I found extremely useful, especially its trap variant later on in the game when you have to contain large groups. Looting is still quite tedious and disorienting even if not pointless; money is needed to make your life easier and at least on hard I quickly learned that you can never have too much money. At least the game has length to accommodate all the features; at 14 hours, BioShock Infinite is the longest non-sandbox first-person shooter I have ever played. But it was a bit too much. During a pointless fetch quest in an industrial district the game started to drag a bit; shortening this section might have improved the game. Luckily the game's final act draws you back in.

Conclusion: The hype that has surrounded the franchise since the beginning seems finally justified. The added epicness to the game's story and visuals, the improved level and battle flow, and, finally, the constant presence of Elizabeth ensure that while Infinite may not be the undisputed number one, it's at least in the competition for the best first-person shooter ever. 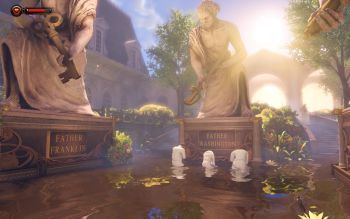 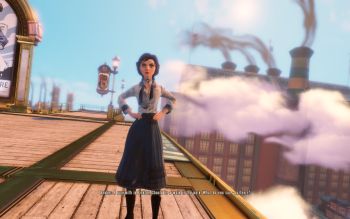