The so called messiah of console first person shooters is revealing in that it confirms my theory that the average IQ of a console gamer is at least one standard deviation to the left of the population average. Granted, I was highly prejudiced against the game upon starting it but I'd have been glad to "cave in" and admit that I was wrong. In fact, playing the first level I thought "this might turn out to be good after all". However, it just wasn't meant to be.

When your spaceship gets taken over in the first level, you start wondering what are all these aliens from Star Wars doing there. The "Covenant" fails to make an impression with one lame Mickey Mouse monster after another - and this is what's supposed to be threatening mankind. When your pod crash lands on a planet, the game eerily starts reminding you of Unreal 2: The Awakening, except for the fact that Unreal 2 is everything Halo could have been. (Granted, Unreal 2 was released after Halo so they probably learned a thing or two from it just as Halo learned a thing or two from the first Unreal.) 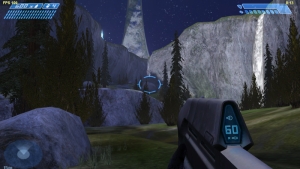 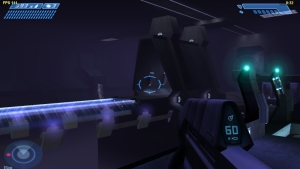 The first big problem with Halo is level design. While outdoor design is mostly of the "pretty cool" variety with its Unrealish landscapes, indoor design is extremely repetitive, ą la Wolfenstein 3D. Architecturally Halo's sterile, blueish hi-tech environments look good but 60-80% of indoor design is copypaste so after a minute or two into a level you've seen everything the level has to show. This is simply unforgivable and totally amateurish. And as if there wasn't enough repetition already, a few of the levels are recycled, only with direction changed! This is not totally unheard of in first person shooters but in the case of Halo it's a sin considering how lazy its level design is overall.

The second big problem is combat. The title "Combat Evolved" is a sick joke as there's nothing "evolved" about Halo's combat, except for the regen system. To put it simply, the combat has no balls. Sound effects are weak and dampened, a problem only exacerbated by childish Star Wars type of monster voices. It's hard to tell what kind of hitreg the game has as there are no clear physical impact points so many enemies just "go electric" (because of their suits) when you hit them. Movements are slow and there's usually no easy way out of combats that often seem to last forever and are extremely repetitive (the infamous Library level is a case in point). During the last few levels I actually tried to avoid fighting as much as I could but often this didn't turn out well. The game is not very hard. Until the last few levels I might have died maybe once per level but in the last two or three levels there were some hot spots where I ended up getting killed a bit more often which got a bit frustrating partly due to the lack of manual saving. You can carry only two weapons at a time and you really don't need more (in terms of ammo/monsters) but it'd have brought some much-needed variety. But kudos for coming up with actually useful grenades and enemy AI didn't seem bad either.

You get to drive vehicles every now and then which might have seemed a bit more revolutionary back in the days. I'd have preferred a bit less Warthogs (cars) and a bit more flyable vehicles. Now it just seems like there's a tree obstructing smooth driving just as you're about to start enjoying it. AI teammates show up every now and then to fight alongside you but they're pretty much worthless, falling dead the moment you look away. Graphically the game is still pretty good looking but the screen seemed odd, a bit "zoomed", as if you were playing the game using a tv instead of a PC monitor.

Conclusion: Considering the reception this game got back in 2001 (2003 for the PC version), it is conceivable that Microsoft simply bribed every reviewer. As for the gamers who found themselves enjoying this game, well, simply reread the first paragraph. To put it more fairly, maybe those who played this on consoles simply had much lower standards. Halo, while visually pleasing every now and then, is maybe the dullest game ever thanks to its dampened combat and repetitive level design. 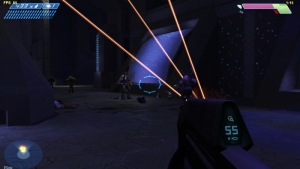 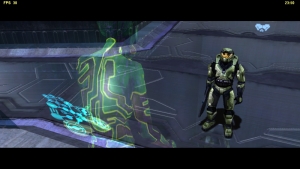