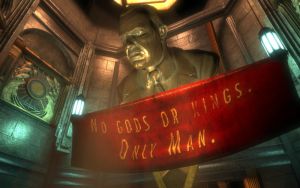 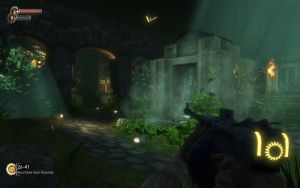 A man builds. A parasite asks "Where is my share?". -Andrew Ryan

If I had to describe Bioshock with one word it'd have to be "disorienting". Having played mostly straightforward shooters and tactical shooters in the past (with the exception of Riddick), Bioshock's diversity came as a shock. Here's a list of some of the features that the game's got to offer, of which maybe one or two might make an appearance in a typical shooter: "Plasmid" weapons in addition to standard weapons, vending machines that sell everything from food to ammo, weapon upgrades, "Adam" upgrades, hacking (safes, security cameras, turrets, door codes), money, actually meaningful weapon firemodes, audio logs, tons of junk items out of which you can manufacture various useable items etc. Add to this large maps with tons of routes and you find yourself in a situation where you're doing a lot of stuff besides fighting or just enjoying the environment.

And that's a bit of a shame because the environment, the setting, is pretty unique. It borrows heavily from Ayn Rand's novel, Atlas Shrugged, and her philosophy, Objectivism. Luckily I'm one of the handful of Finns who're familiar with her work (of which only Anthem, a short story, has been translated into Finnish) and Atlas is among my favorite books. In the novel a group of capitalists go on strike and retreat to a secluded location while the world around them collapses as left-wing parasites suck the life out of Capitalism, the very system that kept the parasites' redistributive programs running. In Bioshock the (supposedly) parasite-free Capitalist utopia is Rapture, an underwater city. The city has a cool 1950s look, which actually was a bit of a turnoff at first but it's in fact exceptionally well used throughout the game. Rapture has everything from shopping districts to apartment buildings. A bit oddly the only thing this underwater city doesn't seem to have are underwater sections.

Numerous reviewers have praised the game's story but I didn't find this aspect particularly interesting. People's fates are told via audio logs, which is something I have liked ever since Doom 3, but the story itself seems pretty ordinary in that it involves the population of Rapture turning into mindless freaks. There are some twists involving your role in the grand plan but the game lacks, story-wise, those really cool moments that you'll remember forever. The game also starts to drag around two thirds into it (the game took me around 12 hours which is quite a lot). Still, the game's production values are top-notch from excellent voice acting to character animations and you come across several interesting characters (mostly via audio logs/transmissions) including Andrew Ryan, the paranoid founder of the underwater Capitalist utopia. 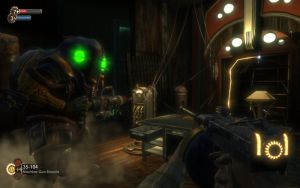 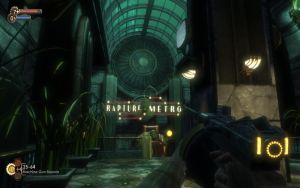 Apart from the various "Splicers" (humans gone mad from Plasmids) that inhabit Rapture, you come across Little Sisters and their Big Daddies. While the Sisters collect Adam from dead Splicers, their Daddies watch over them. They won't attack unless provoked but killing a Big Daddy turns the player into a moral agent by giving him an opportunity to either harvest (kill) the now-orphan Little Sister or rescue her. In theory, rescuing the girl makes the game more difficult by giving you less Adam with which to purchase Plasmids. In reality, the penalty is nearly irrelevant. Your choices also affect the game's ending.

Combat is a bit problematic. Some have praised it for its diversity but I'm the kind of a guy who prefers direct methods over spending time setting up traps and finding cool new ways to kill enemies. With the exception of Big Daddies, every Splicer (essentially zombified humans) behaves more or less in the same way. It's pretty much a requirement that you use the different firemodes efficiently (e.g., anti-personnel bullets against personnel, duh) so as to avoid being out of bullets the whole time. This is actually one of those games that get easier to further you get, at least if it weren't for the fact that after your encounter with Ryan every Splicer gains a defensive boost, which only ensures that the final one third of the game gets rather dull combat-wise. This is a major setback because by the time your countless weapon & Plasmid upgrades should have made you more powerful, the Splicers' defensive boost undermines this pretty effectively. So you're left wondering what was the point of all the upgrades. The game is not difficult, however. The only challenge the game's got to offer are your encounters with Big Daddies, but since they don't attack you unless provoked, you've got plenty of time to prepare. Another problem with the game's combat is that while pretty much every gun is useful (at least when used right), none feels powerful. Most in-combat problems result from trying to switch between weapons and Plasmids and their firemodes while fighting.

Conclusion: Bioshock's got a brilliant setting and, after getting a hang of it, you start to appreciate its diversity. But still, too often you feel like you're spending more time checking drawers and lockers for items than appreciating the rich environment. Combat is another significant shortcoming with the exception of meeting Big Daddies and rescuing their Little Sisters. While seemingly irrelevant, this moral aspect has a lot of gameplay value. 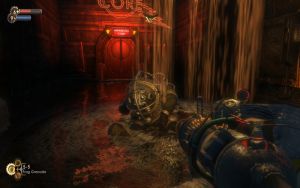 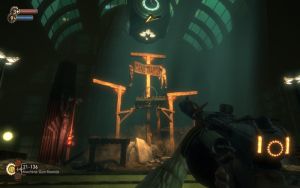 Bioshock 2 is not much different from Bioshock. Both utilize the same Unreal engine and Rapture looks pretty much like it did before with the exception of one level that is thematically very different from the rest. Gameplay mechanics are the same with some seemingly minor but important changes. The game also benefits simply by being a sequel because this means the learning curve is not quite as steep as it was in Bioshock.

The industrialist-Objectivist Andrew Ryan might have been a bit paranoid, but at least his philosophy made him a sympathetic character. Bioshock 2 goes the other way. With Ryan dead, the game's antagonist is Sofia Lamb, a typical upper-class Socialist destroyer. Like many state-centered people, socialists too wanted to create a new man, a man that'd be taught to work for the sacred Common Good, to extinguish the very spirit of individualism that created civilization. Sofia Lamb uses none other than her own daughter as her own little pet project with the purpose of turning her into a servant of the Common Good. Too bad for Sofia that you happen to be the girl's former Big Daddy and it's time to get her back.

In terms of setting, not much has changed. Rapture still looks like Rapture, with the exception that this time you get to do some underwater walking. Too bad these short segments have no tension as there are no enemies or no threat of running out of oxygen. Occasionally a shark swims right above you but they never do anything, which is a shame. But it's an improvement that you're at least reminded of your physical location a bit more vividly than in the first part. Still, these underwater segments could have learned a few things from the airlock segments in Doom 3. 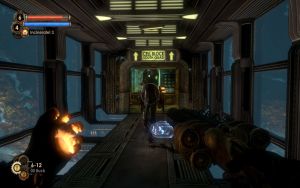 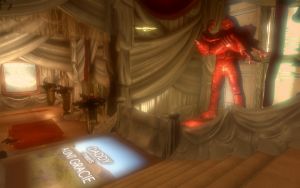 Little Sisters are still after Adam, which means you're not the only Big Daddy around. If you choose to kill Big Daddies, you can either adopt or harvest their Little Sisters. If you adopt them (there are usually 2-3 Little Sisters in a level), you can help them gather Adam from dead Splicers. While they're doing this, you need to protect them. A Sister can gather Adam from two bodies, after which you can escort her to a vent and then either rescue or harvest (kill) her. As before, rescuing yields less Adam. I never harvested a single Sister in either game, not even to see what it's like, but I always had enough Adam to get what I wanted so the penalty from rescuing is miniscule. This is a shame, because the more you have to suffer by doing the right thing the more moral you are. (Of course there's no way you can buy every Plasmid available unless you harvest at least a few girls but the point is that you don't even need to buy every Plasmid; many of them are a waste of Plasmid slots.)

Throughout the game I adopted every Little Sister, had them gather all the Adam they could get and then rescued them. As far as I know, none of this is necessary so I spent a lot of time doing stuff I didn't have to do. I ended up losing sight of where I was and why due to spending most of the time playing Big Daddy which did have a negative impact on getting the most out of the game's setting and story. But it's not like I could've just left the Sisters behind...

By the way, after dealing with all the Little Sisters in a given level, you're given a few dozen seconds until a Big Sister arrives. She's merely a female version of a Big Daddy, only a bit nastier (and I mean a bit; they're hardly stronger than Big Daddies). These encounters were quite fun in fact because I usually forgot to prepare for these battles, so there was this tiny sense of tension as a Big Sister was on her way while I was still recovering from a previous battle.

Combat has improved since the first part for two reasons. First, at no point do the Splicers seem to gain a significant defensive boost like they did in Bioshock. Second, while you still have both traditional weapons and Plasmid weapons, now you don't need to switch between them; you have two weapons (one traditional, one Plasmid) equipped at all times. Both these factors help the game maintain a better flow throughout. One aspect that has not been improved is that while your weapons are pretty balanced, none feels powerful; you nearly always feel underpowered (with the exception of the cool drill, which is powerful even against bigger enemies, but obviously it's no good for ranged combat).

Conclusion: While there are several key improvements over Bioshock, too much of Bioshock 2's gameplay is focused on repeating the same pattern: find a Little Sister, kill her Big Daddy, find a dead Splicer, fight, find a vent, replenish your ammo & health, repeat. So, like in Bioshock, you end up spending way too much of your time (the game took me 10 hours) doing something other than enjoying Rapture. Still, Bioshock 2 is a good game with an interesting setting and tons of stuff to do. Interestingly, while its moral aspect has little effect on the game itself, it's perhaps the game's strongest point. 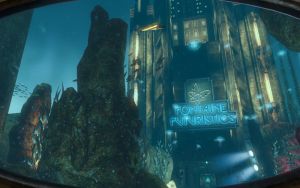 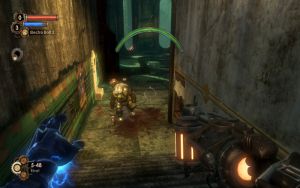 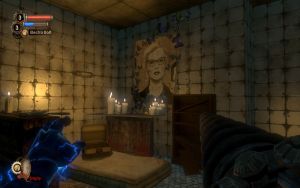 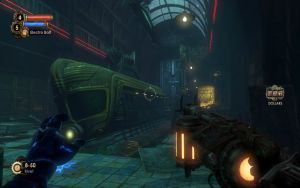