The Review: I've been praising William Gee's work on the use of the so-called true-room-over-room (TROR) effect in his recent maps, but nothing could have prepared me for this one. WGFang is a massive monastery/cathedral type of map with such extensive use of TROR that it'll make your head spin (while those unaware of the engine's past limitations will probably notice nothing remarkable about the whole thing..). Basically the entire cathedral area is teeming with TROR, with some segments housing as many as four layers of it.
The design of the cathedral (spread over a large area rather than a single building) itself is mighty impressive with spires, lancet windows and gothic-inspired architecture everywhere. Texturing is rather conservative, sticking to a few appropriate colors especially for the structures' exteriors while occasionally venturing into more colorful displays in other areas (such as the map's stained glass windows). The only design related snag I have is the low visibility. While the map derives some of its ethereal atmosphere from the low visibility, a bit higher visibility level (perhaps combined with lower surface brightness so as not to lose on atmosphere) could expose more of the map to the player. Now the player has to wait for lightning strikes (or fire his weapon) to clear away the unrealistic black shroud engulfing the map. For sure, this "dramatic effect" may very well have been the intention all along, but I just feel like something is lost when distant structures are pitch black.
With regards to gameplay, this is a rather typical hunt for buttons that should be over in less than 30 minutes (took me 25). There's some potential to get lost due to the size of the gameplay area, but I found myself that way only occasionally and never for too long (one path was hidden behind an opaque window though, which is kind of a faux pas). Combat is mostly on the fair side, but there are some annoyances due to the game's autoaim acting out in the presence of so much TROR and verticality. Hitscan enemies aren't as big of a pain as you might expect, as they seem more confined to the map's indoor segments rather than shooting at you from somewhere in the black shroud. Also, should you come across a jetpack, make sure to check out the map's highest parts as well; while these would be off-limits in most maps, here TROR has enabled their use for some additional exploration that should help you in the final battle (which may be a bit too much of a pain in the ass without the extra resources).

Conclusion: Absolutely epic in scale and its use of TROR, WG Fang easily claims the title of the most impressive TROR map so far (not that there's much competition in that field, the AMC TC being maybe the sole exception). In gameplay terms the map is solid work all-around, but you could make the argument that it's perhaps a bit too conventional and flat for its otherwise groundbreaking design. The new music track is also a great companion and a boost to the map's ethereal atmosphere. 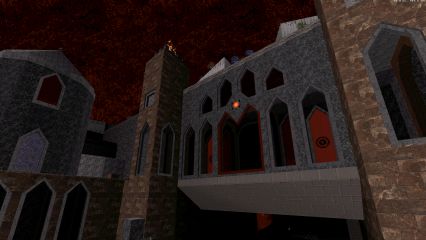 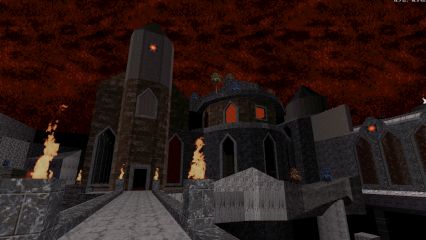