The AMC TC Episode 3 by the AMC Community 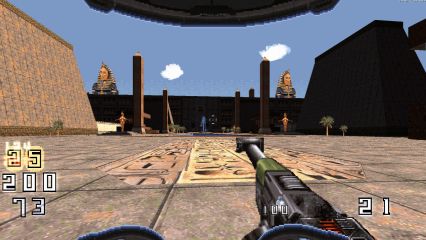 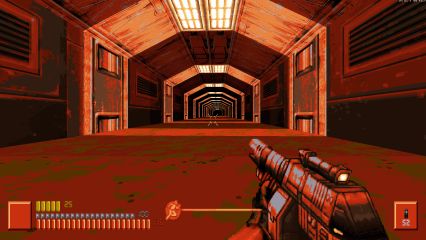 What started off as an in-joke almost two decades ago has now ballooned into a massive, 40-hour standalone EDuke32-powered game. In the third episode the AMC TC is at its most epic yet, and it is here that the story really takes off, relayed to the player via a few cutscenes that serve as infodumps, making the third episode feel like the game's One Son/Two Fathers moment: you know the shit just got real, and there's no turning back. The episode also introduces Snowfall, a new playable character. By now you should be more than familiar with what the AMC TC is, so I'll just leave the introduction at that and dive head-first into the third episode. In case you need a refresher, check out the reviews for episodes one and two.

The AMC Team's journey starts off in X64-2, the homeworld of the aliens from Duke3D. This map has everything from huge outdoor areas to vast, artificial underground caverns teeming with alien life. It's epic in size and features a plethora of the mod's features, including NPCs that fight by your side, driveable vehicles, awe-inspiring backdrops and cinematic cutscenes: a great way to kick off the new episode, in other words. After this it's time for the team to travel to Egypt and face off Le Sang, the evil force responsible for unleashing the monstrosity known as SUPA upon mankind. The Egypt chapter consists of five maps connected to a central hub area. You need to find four artifacts with which to overcome various obstacles, then find four keys to unlock the final door. Initially you'll be hitting plenty of dead-ends (unless you end up playing the maps in the "correct" order by chance), but there's joy of discovery in opening the maps up bit by bit. There are enough hints and it's often pretty clear where and what kind of an artifact is needed, but you can get unlucky and end up playing the maps in the worst order imaginable. The maps themselves in this chapter are all well made and there's enough variety within the confines of a unifying theme. Loke's elegant and extremely polished design combines beautifully with Sock's popular Egyptian textures. Micky's maps boast some majestic sights reminiscent of Serious Sam; you'll need the occasional pinch to remind yourself that you're still playing a kind of a Duke3D Total Conversion. However, maps by both authors also involve a lot of legwork, even after you know where to go. It felt like a slap in the face to get the infinite sprint ability near the end of the hub section; I really could have found "some" use for it much earlier. The other maps in the chapter are visually not quite as epic but much more pleasant to navigate (at least once you realize to just leave a place if there's no apparent way forward; you're probably just missing the right artifact and need to come back later). 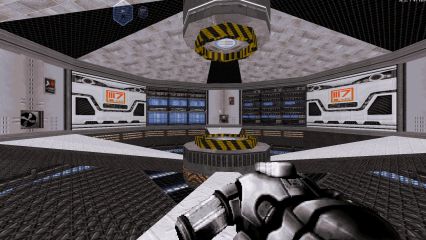 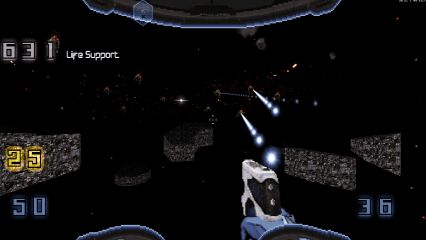 After Egypt things get personal and the AMC team has to regroup and reasses the situation in a mid-game segment involving action, drama and the joy of exploring a brand new AMC Team base. After this you get to play various missions in whatever order you choose. Xuglop Assault takes James and HighWire back to Xuglop, a planet familiar from the previous installments. This is one of the more action-centered maps in the episode and unfortunately the only one to make use of multiple characters. (It also introduces some stealth segments, but all I did was wonder why there's a red beacon light sprite stuck on my screen, then proceeded to shoot the first bad guy I came across.) The map ends with one of the best boss fights in the entire game. In Guerillas in the Mist Fakir dives deep into the jungles of Africa (or South America, if you go by the end credits). This is one of the best maps in the episode with its excellent pacing, blood-pumping background music, misty atmosphere, mostly good use of the virtual reality feature and an unexpected flashback sequence that breaks the map's monotony at just the right time. Even better, someone finally found proper use for the gorilla enemy from Duke Xtreme, a cash-grab expansion from 1997. Forgotten Tomb is a nice switch from the epic scale of the rest. It has its annoyances, but Merlijn's melee and bow weapons are a lot more fun than I expected and the map can even be scary at times. Just don't try playing this map in broad daylight. Eviction Notice is one of the most interesting and screenshot-worthy maps, featuring the Brotherhood of NOD from the Command & Conquer RTS games. Micky has done a hell of a job recreating a whole bunch of NOD structures from Tiberian Sun. However, this map suffers from two rather serious issues: clunky vehicle controls and the sheer amount of legwork. Aside from a few short indoor segments, there's no reprieve from these two. The perennial issue of low framerates is there as well and makes aiming with vehicles all the more frustrating. Micky's character (who debuted in the previous episode) finally gets a proper introduction in Micky Begins, a story-arc spanning several maps. In the first map of the arc Micky has to make his way to a powersuit (think of Gordon Freemand and his HEV suit) while evading the enemy with little firepower. The part too has its annoyances, but it does an excellent job at making you feel like you have to overcome your weaknesses, then return and inflict pain on the bullies who picked on you. The following maps in the arc are visually impressive with extensive use of room-over-room effects and spritework in mostly realistic environments, which is another nice switch from the game's usual environments, but a lot of it is just empty space (figuratively) that serves no other gameplay purpose but to confuse you as you desperately try to look for keys or whatever to get you somewhere. Loke returns for one more map with Chaosphere that mixes several themes in one gigantic, neatly organized and mind-boggling environment. The map has little plot relevance but works as a fun, trouble-free and visually impressive intermezzo. Neutrino and Triton Facility provide the same kind of soothing, relaxed exploration with a sinister undertone that Snowfall's maps did in the previous episode. After all the gigantic landscapes you'll find comfort in the narrow, detailed corridors of these tech bases, and Snowfall does an excellent job at building atmosphere inch by inch. This guy's design is really something else, probably a result of him being a relative latecomer and an outsider, which gives his maps a flavor untainted by the influence of others. Zaxtor's Jungle Pyramid is a sadistic, tortuous trial-and-error oriented journey through a, well, pyramid. To my understanding it's the only map in the episode that's optional - and for a damn good reason. Play at your own risk and only if you really want to push yourself.

Looking at them from a more general perspective, the maps look fantastic with visuals that occasionally outrival those in modern games and skyboxes that just seem to get better and better. Maybe it's an instance of the so-called anchoring bias (with Duke3D being the standard), but I just couldn't help being constantly awe-struck by the things I was seeing. Even cutscenes have gotten better; while a few of them are rather lengthy, I never found myself wishing they'd just get on with it. And James should be applauded for his executive decision to rely mostly on original music, reserving better-known tunes for a few special occasions (and thus giving them more impact). Combat is also satisfying throughout the episode with visceral and punchy weapons and lots of fast-paced combat with no resorting to cheap tricks such as pitting the player against bullet-spongey enemies. I also liked the fact that Snowfall, the new character, has less base health than the other characters, which forces you to play him a little bit differently, to be smart about the way you approach the enemy and to take full advantage of your limited shield.

The previous episodes suffered from some obscure gameplay mechanics that may have been clear to the guy who designed the map or coded the feature in the first place but left others scratching their heads. Here there's less of that, but I'd still suggest the player to refresh their memory by going through the short tutorial map. That being said, there are still quite a few annoyances scattered throughout the episode. Autoaim hasn't been the way to go since the second episode, but in episode 3 quite a few weapons and vehicles force autoaim regardless, which can throw you and your muscle memory off. With respect to items other than ammo, I'd prefer a plain message telling me what I just picked up rather than having to check the inventory for a description, and some regular items such as ammo boxes are quite tiny and thus hard to spot especially in maps with low lighting. Vehicles in general still need a lot more fine-tuning to make driving and shooting feel less clunky. Voice acting is uneven, ranging from terrible to excellent, but this should be considered part of the game's appeal. The real issues are the uneven sound quality of the voice lines and dialog occasionally getting lost amidst all the background noise. The perennial issue with framerates hasn't been solved either, but there's little the team can do about that. There is finally hope for a better Polymost renderer in the near future, but for now I had to experience the third episode in all its 20-frame glory. As a last note, there are assets you can buy via the worldmap, projects you can research and artifacts that you can assign to specific characters, but these RPG elements need to be fleshed out better; aside from clear-cut weapon upgrades (say, bigger magazine size), I never felt like I needed or benefited from any of these. Maybe the value of these is better understood when the game is played in its entirety rather than a single episode at a time.

Conclusion: The third episode is very good but doesn't quite reach the heights of the previous episode. The maps have some recurring issues, such as clunky vehicle controls and a lot of legwork, and the persistently low framerate is hard to ignore, but the good easily outweigh the bad and there are even some notable improvements, such as better ironed-out mechanics. With its strong set of characters and epic maps filled with new features and a terrific soundscape, there's ten hours' worth of content here you won't find anywhere else, certainly not for free. Things just got serious for the AMC Team; too bad we're gonna have to wait another few years to find out what happens next. 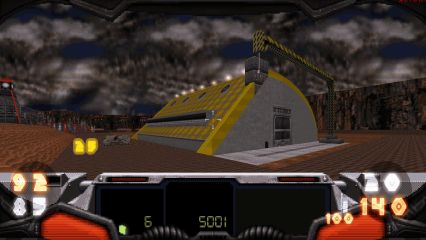 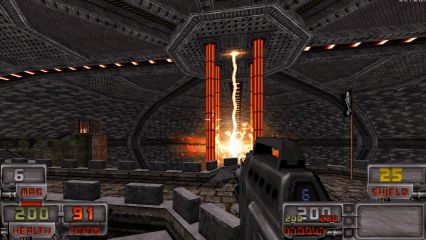 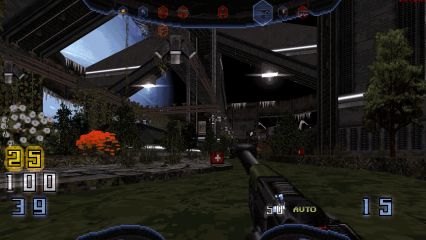 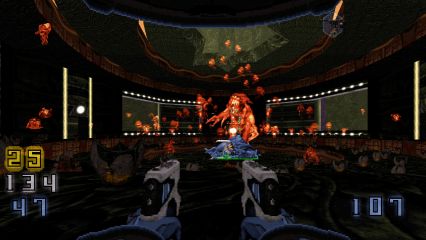