The Review: Duke's journey deep into the bowels of the earth continues in WGSP2. If the previous map, WGSP1, was based mostly on the outdoor bits of The Abyss, this continuation is heavily influenced by the original's second half, taking place in an enormous cavern. Like its predecessor, WGSP2 seeks to modernize and expand the idea of the original, doing with the theme what the developers might have done had they had access to better technology. With a few eye-catching constructions, the use of the true-room-over-room feature is no longer so subtle, but it's still not something the map seems built around. Owing to its physical location, the map makes great use of lighting with dramatic fires casting red light all around. This being mostly natural terrain with some alien stuff thrown in every now and then, there are no keys to look for but plenty of buttons instead with some puzzles familiar from The Abyss. It's not always immediately obvious what a given button does, but you never really have to look far or do any serious backtracking to find where to go next. Cracks have been put to good use as well, so pay attention to walls around you. Action is rather constant with plenty of Octabrains, troopers and Commanders (not to mention the occasional Battlelord), but the map has plenty of supplies and space to move around. Music from Fusion Station (E2L4) accompanies your journey, being a perfect fit with its oppressive, larger-than-you feel. Overall a worthy and logical successor to WGSP1, if with a slightly less interesting environment. 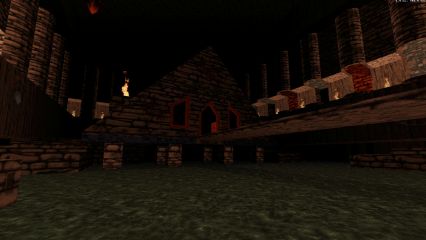 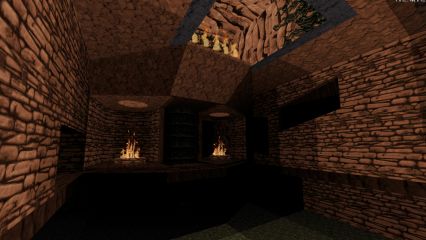