The Review: These two maps wrap up William Gee's Abyss-themed mini-episode (previous parts reviewed here and here). I'm reviewing the last two as a single "unit" because there's very little thematic separation between the two, with both maps being located within an alien spaceship, and if I were to review them separately I'd just end up repeating myself. These are the kind of maps that if you were to type dnshowmap or check the maps out in Build they'd seem small, but you still end up spending 10-15 minutes playing them due to the way the puzzles are structured around a central area in both maps. So, starting from that central area, you'll be going after many buttons to open up walls on the edges of the area, with each wall revealing more and more enemies along the way. It gets a bit more nauseating than in the previous two maps where your surroundings didn't feel as constraining; here it feels more like you're confined within a battle arena for an extended period of time. The positioning of enemies is still good and it never (at least until the very end) feels like you're forced into an unfair encounter. For example, there are plenty of Sentry Drones but you tend to have enough space to move around and even lure them into blowing themselves up. Due to the amount of enemies you can quickly run out of ammo for a given gun, so switching between them is called for on numerous occasions, putting your weapon management skills to test.
While the first two parts of the episode were obviously influenced by The Abyss, there's very little of that here aside from the theme; map 4 in particular goes for a much more epic scale and ambition, while map 3 plays more like a lobby section of the spaceship (which, I suppose, it could be). The maps are also very good with colored lighting and cycler effects, and to my surprise I didn't really have trouble seeing enemies despite the maps being dark and my playing them in the middle of the day. In general both maps are audio-visually very busy with dramatic lighting and clanking machinery all around you; add to that the constant influx of enemies and you don't get much respite. Near the end of the second map you'll come across some of the best use of the true-room-over-room effect yet; it's a sight to behold for sure, and that a game from 1996 is still capable of surprising you (even if with the aid of more recent engine changes) is pretty amazing in itself. Too bad the ending itself is a spammy boss fight with no cover.

Conclusion: The last leg of your journey against yet another alien threat is not quite as good as the two preceding parts, being thematically less interesting and flirting with sensory overload at times, but it's still a satisfying, occasionally visually stunning set of two maps where your combat skills are put to a proper test. 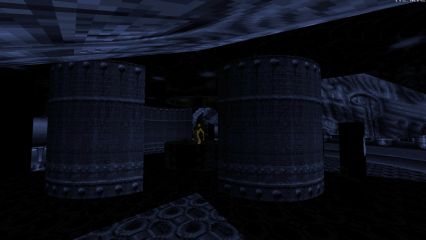 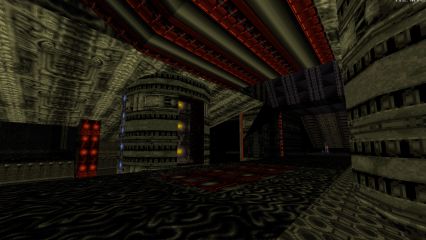 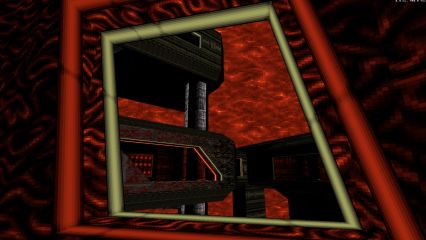