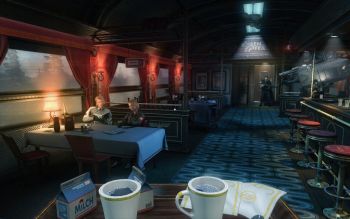 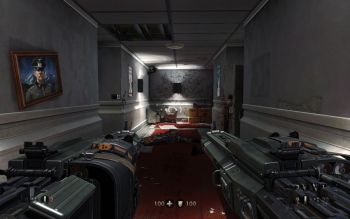 Every once in a while a game comes across that restores your faith in gaming. That game is NOT Wolfenstein: The New Order. Nope, that game was reviewed a month ago. The New Order is the game that shatters your fragile faith. Oddly, this game has been applauded by many for doing the retro thing right, but to me it came across as one gigantic cutscene, right up there with other interactive movies like Max Payne 3 (which had superior pacing). Even Call of Duty is much less plagued by cutscenes. The cutscenes themselves convey a story that is so melodramatic that it makes Korean drama seem laconic. The evil-Nazi cliché is played ad nauseam. (Not that it's an unfair representation: The Nazis were just as brutal as they are in this game, torturing and experimenting on living human beings, shooting patients in their hospital beds, etc.) Even so, the story never grows on you or gets personal. Maybe it's the bouncing around (and even off) the globe that makes the Nazi dystopia feel less threatening. Blazkowicz feels like an outsider in this Nazi New Order (which, in a way, he is).

Occasionally you get to shoot things, but combat is fundamentally mediocre. They've tried to spice it up with perks, a cover system, stealth sections, a laser cutter and akimbo weapons. None of these aspects felt finished; everything seemed half-assed. I had the most fun playing stealth, but map layouts were often quite unaccommodating to such an approach. The stealth sections also best revealed a rather pitiful enemy AI, making you feel slightly embarrassed for killing these nitwits who're basically screaming "I'm looking away now, kill me!". In combat situations the weapon selection wheel is an abomination; I just couldn't get a hang of it and had to find cover every time I wanted to switch weapons. Some "minigames" (QTEs) end rather abruptly, leaving you momentarily wondering whether you just died, moved on or ran into a bug.

The game uses id Tech 5, the same engine Rage used. In other words, brace yourself for low-resolution textures, static lighting, and tons of texture pop-in. Playing this is kinda like Christopher Nolan's Inception, where the dream walkers can see the world around them being constructed, and the game doesn't have anything like Rage's fantastic outdoor areas to compensate for the dull indoor graphics and lighting. Another Rage carryover is the disorienting way you pick up items: Once you get a prompt, you have to press the use key to pick up items, of which there are many, so mostly you just mash the key while looking around. It's very tedious and totally unnecessary; why would I NOT want to pick up everything? Once a nasty bug removed all items from a room filled with enemies, and only a map restart reinstated them.

The game isn't all bad. The three Nazi antagonists are all twisted sons of bitches that you both love and hate (or love to hate). The game does get slightly better after its incredibly tedious start. The Volkshalle is a nice sight, as is the Nazi Moon base, and there's a very short but atmospheric train ride mission that could have been a lot longer. And while combat in this game doesn't reinvent the wheel, it's often satisfyingly visceral. But these are not enough to save the game from boredom, as I often found myself looking at the clock, hoping the game would end already. 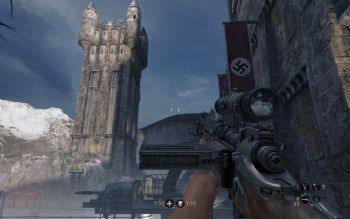 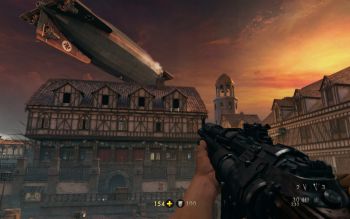 The Old Blood, a standalone expansion, is an exemplary "DLC". It is generous in content, offering more than five hours worth of gameplay, and its story is distinct from that of the main game. Its core gameplay mechanics are the same as are largely its cast of enemies and weapons, but to criticize that would be unfair; The Old Blood is still just an expansion. But it didn't really do much for me. There are some improvements over the base game, such as a lot less cutscenes, no melodramatic storyline (it's more tongue-in-cheek in tone), and coherent level progression. But it's neither inspiring nor novel, being essentially The New Order redone in Return to Castle Wolfenstein type of environments. One of the expansion's biggest offenses are the so-called Nightmare levels, which are the levels of the Wolfenstein 3D shareware version. It's a nice idea but totally half-assed, turning nostalgia trips into tedium mostly thanks to the player's sluggish running speed. Luckily you don't have to play them but still often welcome the chance to do so, because as far as gameplay is concerned, the expansion itself is just as dull as the base game, if not more so.

Too many combat situations rely on sealing the player within an area consisting of narrow passageways. The player may be encouraged to be stealthy but thanks to the game's inconsistent AI, these encounters end up playing out the exact same way almost every single time, giving the player a "here we go again" sensation faster than a Commander finishes shouting "Alarm!". Then the player has to deal with enemies that are brought in in large numbers by a respawn generator. I was so bored with this concept (which carries over from The New Order) that the infamous "Nazi zombie" segment later on in the game felt slightly refreshing. Still, The Old Blood is an improvement over the base game; just don't expect much from it. 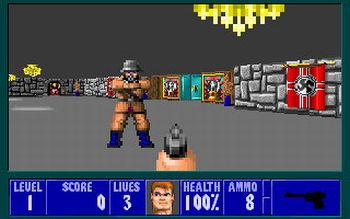 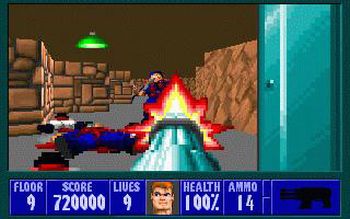 I tried out the shareware episode back in 1996 but that's as far as my exposure to this classic goes. I then recently picked the game up on a Steam sale and decided to give it another try. The game felt a bit tedious at first with its monotonic combat, lack of variety and confusing map design. The lack of a proper strafe function also threw me off a bit. But it gets better once you start getting a hang of it. Wolf3D has that satisfying combat that id Software is best known for; it's the sensation you get as you successfully clear a room and collect all the items (which make a nice pickup sound). The game is at its best when its map design doesn't rely on intentionally confusing layouts, but even when the game isn't trying to throw you off you kinda feel like all you can do is hope that you're drifting in the right direction. I also found the game quite challenging, at least on the second highest skill setting: Ammo is always scarce and it's easy to lose a lot of health quickly so exploration is pretty much a must (and there are plenty of opportunities for exploration). The Steam version has a lot of content with its six episodes (the three-episode base game plus the three-episode "Noctural Missions" expansion). I only finished four of these episodes; the Nocturnal Missions expansion seemed to rely too much on convoluted map design. All in all, I was positively surprised by this classic. I'm not saying this is better than the more recent Wolfenstein games, but I was a lot less disappointed playing Wolfenstein 3D (low expectations) than I was playing The New Order and The Old Blood (high expectations). If you do decide to check the game out, don't forget "Zerbrechliche Klauen", a three-map mini-episode by Quakis. The pack is definitely Wolfenstein 3D at its best, and it shows how to make good maps even when the engine severely limits your options.

(The Wolfenstein 3D screenshots are from the Steam store page.)