Secrets of the Acropolis by Level Infinity 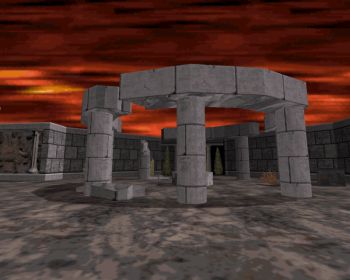 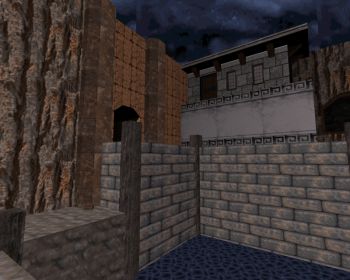 This ancient Greece based Total Conversion has been on my to-do list ever since it was released. The problem back in the day was that I got stuck pretty early on and simply got bored. This is a shame as the project is in many ways of commercial quality and, as such, doesn't suffer from the kind of inconsistencies that plague the design of many amateur mods. Not only that, but its list of mappers consists of several key figures behind The Gate TC such as Aaron Barber and Ryan Isenberg, both of whom have published usermaps as well and eventually found themselves working on commercial projects.

The seven-map episode has a strong start with Aaron Barber's contribution, boasting great visuals of an ancient Greek village against a red dusk sky. What follows is an episode that increasingly seems to ditch outdoors in favor of cramped temples and caverns. Overall there's way too much emphasis on temple-type maps, which in a way makes sense considernig the theme, but I'd have wanted to see more of the kind of visuals as in the first map, maps that feel less enclosed. Locations such as the Attican countryside, the port of Piraeus etc. could have provided a much-needed switch from all the dark temples. As it is now, even the Parthenon is surrounded by weird walls for no apparent reason (maybe to ease the toll on the framerate?). To be sure, every map in this TC is well designed with good lighting, texturing and layout, but it just doesn't seem to take full advantage of its theme. Anyway, hats off to the texture artist who has provided a strong and consistent set of textures that makes the Greece of times past come alive much better than what the stock textures would have allowed.

Action is pretty vanilla with all the v1.3d enemies making an appearance in moderate numbers. No wonder the authors ended up working on commercial projects; they've struck such a perfect balance between items and monsters. The obvious downside to this is that seasoned veterans won't find the maps much of a challenge. The episode's puzzles are another matter. You'll probably get stuck a lot, although most of the time only briefly. Getting stuck is not due to the map layouts (the maps are pretty easy to navigate) but because there almost never is any indication what a button you just pushed activated. In maps with a modern-day setting this could be solved with viewscreens but they're out of the question in ancient Greece. Still, symbols & such could have been used to ease all the legwork. The worst offenders, however, are buttons and doors that have been hidden from the player. There aren't many of these but, as anyone used to games of the past knows, getting stuck even once for a long period can really suck the fun out of life to the point of leaving you with bad memories of a map that otherwise might have been a great experience. (Here's a little hint in case you get stuck in the third map like I did.) Puzzles of this nature really suck in a mod that's otherwise of such high quality.

As for the rest, Secrets of the Acropolis is pretty much like Duke It Out In DC in that there's no extra content beyond the maps and textures (and a pretty good soundtrack). There are no new weapons or enemies, which isn't necessarily a bad thing, but even small con edits could have made things a little bit more interesting. The ending too is a slight disappointment, being merely another generic battle against an Overlord.

Conclusion: Secrets of the Acropolis is considered a classic by many, but over the years it has also been singled out for having bad puzzles. The reputation is well deserved; its seven-map episode has strong design with an appealing set of new textures, but it could have gone a bit more "commercial" with its puzzles. Also, while the maps feel authentic to the degree that the original city maps did, they also could have used a bit more variety in terms of locations by focusing less on narrow hallways and more on open areas. 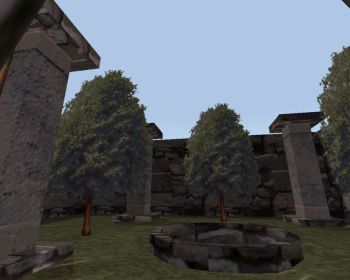 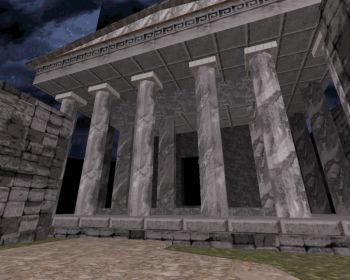