THE GATE BY BDP 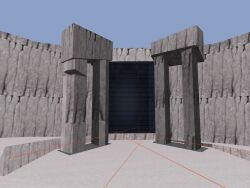 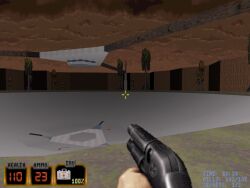 The Gate is a classic, if not the classic Total Conversion. It features 24 levels - spanning over four different episodes - some new enemies and plenty of new art and wild atmosphere. This is re-review (9th of March 2007) of The Gate, which was reviewed for the first time back in 1999.

The levels:
The first episode is about Duke searching and destroying aliens who were left on Earth after the first alien invasion. The first map, the only city map of the whole bunch (I'm sure some version of this level was released separately as "Blade" - referring to Blade Runner), is a bit sloppy and confusing but a good map nevertheless. Antarctica (E1L5) is easily the best map of the first episode.
The second episode takes Duke through a holiday resort in Permuda, Mt. Everest (this one was also released separately) and finally, to Mars. My favorite of the second episode is a little spaceport map right before the Mars reception level (which was awfully confusing with tons of buttons and air ducts).
The third episode is a bit so so. The first two maps are good, the second one being based on Total Recall, but from then on the levels three and four were mystic/temple kind of maps which I tend to hate. But the last two levels of the episode, both space maps, saved the day (especially the last one, Tanheuser Gate, a huge space station with tons of neat ideas. The author of this map, Aaron Barber, became a professional level designer who worked on Q2, Redneck Rampage and now works for Valve Software).
The fourth episode begins with an excellent level, again by Aaron Barber, Wilderness Receiver Facility, a good mix of weird outdoor architecture and hi-tech, enforced by a killer midi. This is followed by the worst map of the TC, another temple style level with a few annoying puzzles. Then comes Ryan Isenberg's classic "The Hive", a map that was released & reviewed years ago (download here). Some of you may be familiar with the fifth level, "Drone Chambers" (released separately as well), a cool map, although with a few bad puzzles. The boss map has its downsides but the general idea is pretty cool. You have to destroy four giant brains before you can kill the boss. 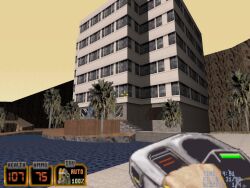 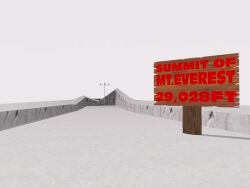 The levels are generally ten- to twenty-minute maps. I very much liked the atmosphere in most of them, especially the soundtrack turned out to be a good one with a few true gems. The levels have plenty (some actually have too many) of atmospheric sound effects. For the most part the levels have good puzzles but some expect too much from the player. Remember, dnshowmap is your friend when the going gets too confusing. There's plenty of variety but only one city map.

The stuff:
There's just one new enemy, a Predator type creature who uses a cloaking device. These guys come in various forms, firing everything from laser blasts to heat guided RGPs. You'll also spot some other anomalies like these flying bat-like creatures and some troopers who transform into Octabrains but these guys appear in one level only. You're given only one new weapon, a CD-thrower that replaces the Freezer. It's quite cool and I'm happy with having all the old guns at my disposal.

The others:
The levels are filled with new art, sounds and music. A lot of the "new" art is sloppy and doesn't fit. Sounds, as I mentioned, are mostly good pieces and help pumping up the level of atmosphere.

Apparently, The Gate was done in about six months, which is respectable but no wonder when your team has 17 mappers. The Gate was released in 1997 and was therefore one of the first worth-mentioning Total Conversions. Don't let a few bad levels let you down - this TC is well worth your time and some of the levels are true gems.
Here's my pathetic review from 1999. 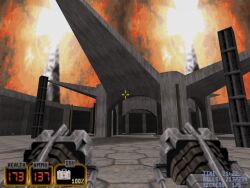 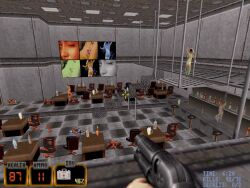