The Review: The last time William Gee released a standalone usermap was well over a decade ago. Since then his forays into mapping have involved bigger projects, such as WGRealms 2 and Alien Armageddon.
Anyway, WGSP 1 is way more vanilla than his previous works. Citing The Abyss (E1L5) as his influence, WGSP 1 comes off more like a turbo-charged The Abyss. The map's defining features are its fantastic use of 3d lighting (this being a night-time map, there aren't that many good opportunities for long shadows anyway, but where such opportunities appear, William makes the most of them) and its use of vertically stretched canyon textures (just like Levelord did them in The Abyss). Combined, along with the help of some deep ravines, these provide a sense of depth and height, making for some truly impressive terrain design. There's also some rather subtle use of the true-room-over-room effect, with its implementation being flawless with no glitches and no noticeable effect on the framerate (as it now works in Polymost, the good renderer). A few buildings appear later on, standing out as almost surreal sights in the midst of all the wilderness; but hey, there's always room for some style over realism.
Gameplay involves the usual buttons and keys but with quite a bit of jumping as well, which gets increasingly y-axis and perilous toward the end. Monsters come at you in fair numbers, but the openness of terrain isn't a perfect fit for some of the hitscan types, so it can get a bit tedious at times. You also have to be constantly aware of fall damage, as health isn't that abundant.
All in all WGSP 1 is a very impressive "re-imagining" of an underrated Duke3D map with design that plays to the strengths of the physical location and tough combat that can get a bit annoying at times. 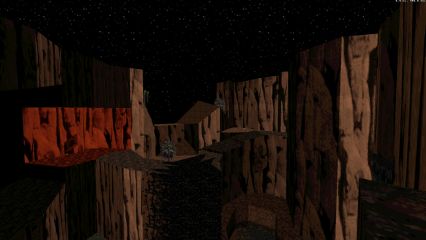 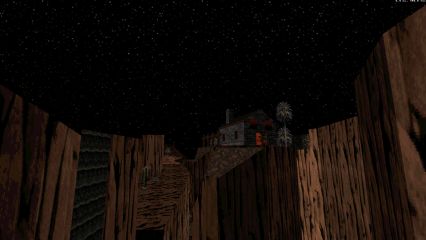