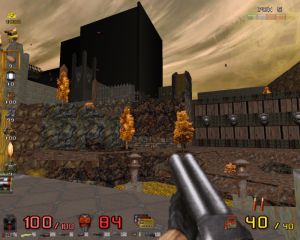 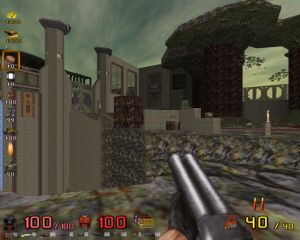 This "update" to WGRealms 2 consists of eight new levels so it's well worth its own review. I won't cover any WGR2 basics in this review, so refresh your memory by reading the review of the first version here. This review (along with the score) deals with the new content only.

Seven of the eight new levels comprise the third episode, "WG Realms", featuring five maps from the popular WGRealms (vanilla Duke) episode and two brand new maps. The WGRealms maps have been revamped with WGR2 textures and features, giving them an unmistakable WGR2 look and feel. Having not played the episode in its entirety since its release, I was more than happy to go through the levels again, and was able to do so without considering the WGR-to-WGR2 conversion a cheap way to add content. That being said, the levels are not as easily separated by distinct themes as the levels in the "Siege Breaker" episode. Still, in William Gee's usual style, the levels are filled with amazing outdoor architecture, combined with gigantic stone structures and beautiful nature with leaves falling off trees and birds singing (not that you get many chances to hear them). As far as design is concerned, my only complaint is the apparent lack of lighting in some of the levels. The sixth level, for example, had a bit of a dull look with its uniform light level.

While architecture remains impressive throughout the pack, it's gameplay that has taken the biggest hit. While Siege Breaker remained a well-balanced episode with combat consisting mostly of fights against relatively weak enemies, the new episode is filled with tiresome strong-monster spam. Cyberdemons are far more abundant than in Siege Breaker and often you have to fight two or three of them at a time. On top of that, they're usually accompanied by dozens of weaker enemies (and several not so weak, including flying Cyberdemon torsos that look cool though) . This isn't to say that the new episode is too hard - it's not, since there's always plenty of ammunition and health available, but it is exceedingly boring at times. There are times when you're under the impression that you're free to proceed to the next area only to be forced to engage another bunch of relatively strong enemies, with no way out other than to finish what you already finished once. No doubt many of you out there enjoy this type of gameplay but my interest has a bad habit of waning when faced with too much of repetitive, loud action. 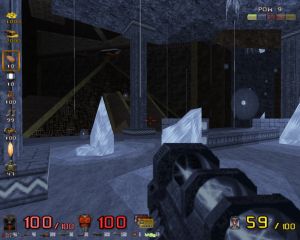 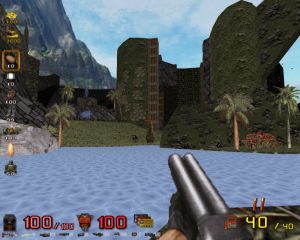 There are ways to alleviate these problems such as using the BFG and/or the POW ability to clear out large enemy masses, which is just tons of fun, but here you've got a problem with timing; you may not have these things when you need them the most even if you do your best to avoid using them against weak enemies. (I can imagine the author(s) not having this problem, knowing exactly when to expect major fights.) In short, you often find yourself in massive battles with no fast way out. By the way, you better not think of using your feet as a way to run away from fights because trying to move on to the next area only reveals another massive bunch of enemies, which is particularly evident in Open Season. Like in Siege Breaker, you've got plenty of space to move but here you're only likely to run into more enemy projectiles. Nowhere is this more apparent than in the last map where you've got a huge outdoor area but basically no place to hide and rethink your strategy.

There are other minor problems too, such as the lack of a story (what's all the hi-tech stuff doing there?) and annoying status ailments, with a noticeable increase in bleeding-causing attacks (what's the point of slowly bleeding the player when you know exactly how much health you have left by the time the bleeding stops? Why not just immediately bring the health down and save me the trouble of having to come to the conclusion that a quickload is in order despite being still alive?).

In addition to this 7-level episode, DanM has supplied the mod with a usermap, Chaos Realms. Compared to WG's vast, nonlinear maps, this one is more of a linear pipe with themes spanning from volcanic terrains to greener areas. Varying themes keep the map interesting but its narrow design causes some frustration with close quarters indoor combat; while WG always provided plenty of space to move, here you're more likely to get hit by exploding enemy axes. The map is huge, well over thirty minutes, and its ending is a massive, but fun, boss battle. As a whole, the map is more difficult than any other map in the pack but you're unlikely to get stuck in one area fighting Cyberdemons.

The pack includes another usermap as well, Castle Demonhorn by Spiker. The map is huge, spanning over fourty minutes. It's got a more consistent theme than DanM's map but is generally not as well designed as other levels in the pack, relying more on decorative spites than details. Still, the map's got its moments with gigantic caves and well-designed castle exteriors. Its gameplay is also more finely tuned, making it a refreshing trip especially after the exhausting WG Realms episode.

Conclusion: The conversion of WGRealms levels into WGRealms 2 levels turned out pretty well but somewhere along the way what made Siege Breaker work so well got lost. Instead of pitting Duke against an army of easy-to-deal-with enemies (plus the occasional boss), a huge chunk of your gameplay time is now spent fighting foes that don't go down easily. Despite this, the new patch is well worth checking; just don't expect a walk in the park. 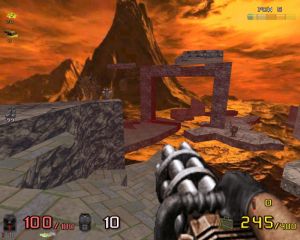 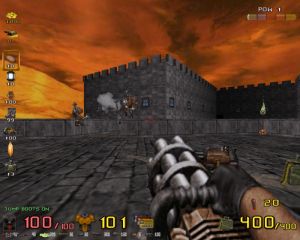