Description: It's been almost a year since the release of Another Attack: Woudrichem War. Now we've got a sequel, continuing straight from where Woudrichem left off. While the previous map was based on a real-life town in the Netherlands, Weissensee is based on a lake and its surroundings in Austria.

Into It: The gloomy looks of the predecessor are present here as well, making the lake resort seem not that appealing as a potential place to visit. The map consists of two chunks, separated by a bridge. The first half is focused more on natural surroundings with hills, trees and a cave. The very first bit, a camping site with mobile homes and a beach, had me confused for a few minutes due to an easy-to-miss button. (In fact, had it not been for Discord, I probably would have had to resort to cheating to get past the section.) Navigation-wise that's the only bigger problem; for the rest you get viewscreens & such to help you get around the area. While this side of the bridge is more linear, the other side has more open-ended gameplay where you chase after a series of buttons in urban surroundings. It's a nice switch from the first half if only for the sake of variety, for I really liked how the first half opened itself up bit by bit, with you emerging from a location you could only see from a distance some time earlier. Weird enough, you barely get to visit indoor locations, and even water, which has a strong visual presence throughout the map, is barely utilized as a gameplay device. This isn't necessarily a bad thing though, merely something that caught my attention; the second half of the map takes place in a town, but there's only one building that's enterable, which had the effect of making the second half feel more like a battle arena. There were a few times when stepping on a seemingly insignificant piece of land triggered an explosion that opened up a route, which felt a bit too convenient. Again, not a big deal, just maybe a bit forced.
With a map of this size (it's about 40 minutes long) monsters come in all shapes and sizes. Even with the inclusion of a few scenes where a trigger respawns in a whole bunch of aliens, the action never really felt like it got too spammy or tedious, and I found myself enjoying and feeling at ease with the map's combat flow.
Design-wise the map has plenty of eye-catching details, including some cool shots of the lake/river and recurring opportunities to see the town of Woudrichem in the distance. A few moving vehicles do wonders to make the environment seem less static, and there's even what might be the first set of trampolines in a Duke3D map (don't quote me on that though). Other noteworthy locations include a crystal cave and a farmhouse (with a tractor, although it's not as cool as the one in MatH Pak). As is to be expected, Maarten (a musician in real life) has supplied the map with a new track. It's a good one that incorporates some outdoor sounds and fits the map's calm but gloomy atmosphere perfectly.

Conclusion: Aside from that one switch I missed, Weissensee is top quality in every respect with plenty of eye candy and easy-flowing combat. The map has a relaxing atmosphere to it and its rather sizeable playable area has everything from a camping site to a town centre. A worthy successor to Woudrichem War, although as a whole maybe not quite as ambitious or memorable. 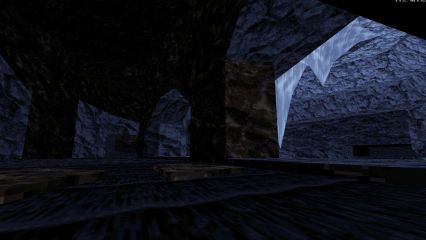 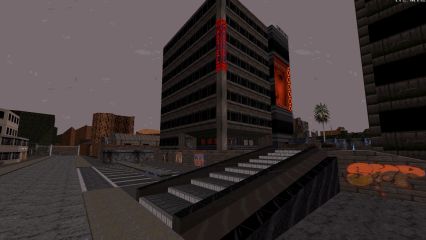