Description: Maarten van Oostrum has had quite a mapping career, and while his maps are renowed for their originality and creative ideas, he's never really reached outside his "comfort zone"; until now, that is. Woudrichem War is a huge city map, except it's unlike anything you've seen before; it's an entire city on an island, based on a real-life location in the Netherlands. How could one pull something like that off in Duke3D?

Into It: Being a self-contained gameplay area (think of GTAV), everything in the city is yours to explore. The only obstacles here are your natural surroundings, a large body of water and green hills beyond it. Even the rooftops are accessible, but this obviously imposes a compromise; as you should know, accessible rooftops necessitate the use of "silent teleports" for entering buildings. But here the transitions are pretty seamless; you'll notice them, of course, but the immersion never really suffers (and the rooftops themselves make for a fun gameplay area). The map's architecture is visibly "European" and not in small part Rouaud-like; it could be that Maarten was simply influenced by the Roch series (as has always been evident), but maybe it's as much a factor of having lived in similar surroundings. Whatever the case, Duke is a long way from Los Angeles. Sometimes Maarten's particular use of sprites and textures gets a bit too "creative" for its own sake, but that's always been the case with his maps; most of it is to the map's benefit. The city of Woudrichem has a gloomy atmosphere with its gray overcast, resulting in lighting that relies mostly on simple 3d effects, but with this level of detail and architecture 3DR-type lighting would be next to impossible (and unnecessary) to implement.
You start at a bridge leading up to the city, but before you get to enter through the gates, you have to explore the city's edges. This helps break you in slowly, as you'll get a good general sense of the city's scope before thrown in the middle of it. Once inside the gates you have more, even total, freedom of navigation. There's potential to get lost here with streets expanding every which way, but Maarten has put enough viewscreens all over the place to guide you in the right direction; just pay attention to the landmarks shown on the screens. Figuring out your bearings, then navigating your way toward the objective, makes for a fun little puzzle. While Woudrichem is mostly nonlinear, the importance of pacing is never forgotten: the map progresses in a more linear fashion from the windmill onward, but I'll leave the details for you to discover, as I consider this the map's high point. Maarten has also supplied us with a new, self-made soundtrack to accompany Duke's orgy of violence. But while it's a well-made, atmospheric tune that'd fit in well in many maps, in Woudrichem there's a noticeable mismatch between the tune and the map's gloomy visuals.
There are a few general issues too. Sometimes your way is blocked a bit too obviously by an invisible wall. This was done to cut off potential shortcuts, but it just stands out, probably because we never came across such invisible obstacles in the original game. Framerate can also get pretty bad when the map is viewed from certain angles; while I have brand-new AMD hardware (for which EDuke32 is poorly optimized), those with older hardware may suffer more. (Surprisingly I found the "Classic" renderer faster than Polymost.) And despite the generally good enemy placement, including extensive use of Recon Patrol Vehicles (Woudrichem being the second map in just two days to utilize this rarely-used class of enemies to such an extent), and diverse use of various combat set-ups, occasionally you might get hit by a rocket or a laser blast shot from miles away by a target you never even saw.

Conclusion: Over the years you grow to expect certain type of maps from an author, but it's when they make that jump outside their comfort zones and try to deliver us something new that you need to be paying attention. I'd call it massively ambitious to base your map on a real-life location almost in its entirety, especially on an engine as old as Duke's, but Maarten has delivered by working at the very boundary of what's possible and what's not in Build/Mapster32 (design-wise; the technical aspect is left to the likes of Billy Boy). There's plenty of fun exploration and cool things to see for a generous 35-45 minutes. 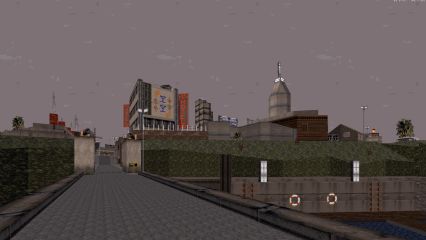 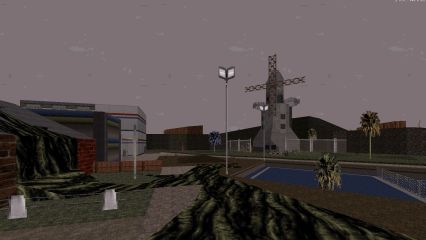