The Review: DannyFromNewOrleans has been relatively prolific ever since his appearance on the scene almost exactly two years ago (Day of Night). His style is marked by crampedness, attention to detail and design that conveys a slight sense of desolation and unique atmosphere, even if his environments are often rather unremarkable themselves. This map improves on the first aspect, giving Duke more space to move around. There are still some narrow segments, but not really to the map's detriment. The location is somewhere in Siberia; for one reason or another, Duke finds himself working as a watchman. There is quite a bit of variety here; a cave section, a small dock with a ship, a library, a research base and even a short visit to an alien spacecraft. The research base is mostly submerged, leading to an extended underwater segment. As such segments tend to be hated and thus underused in videogames, I found the segment here refreshing (even if, or maybe because, there's no real threat of running out of oxygen). The slightly weird atmosphere fits this one better than the author's previous map, Null Moon. Again the scale feels a bit off and nothing really stands out, but design is still solid all-around, and your surroundings with plenty of snow-covered terrain and a starry nightsky against a body of water that stretches out into the horizon make for a pleasant gameplay environment. Still, a bit of ambition wouldn't have hurt.
Gameplay is pretty enjoyable with a good allocation of guns. You'll get your hands on the shotgun and chaingun later on, so for a good while you have to make do with lesser weapons. The map provides a good 25 minutes or so of relaxed exploration. 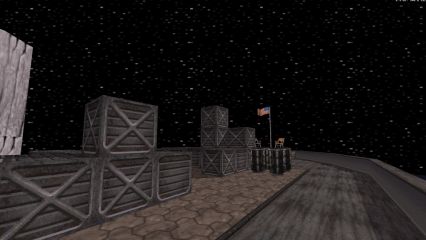