The Review: DannyFromNewOrleans has been on a spree lately, publishing three maps in a span of just several months. (Null Moon is all the way from March; sorry for the delay!) This one preserves the hi-tech/industrial look of the previous maps but opts for much snowier surroundings. The place is somewhere in Canada, but the map doesn't really resemble a real-life location owing mostly to its small scale and narrow layout; even the village near the end seemed weird and miniaturized. Not that this is necessarily bad; the scale and your restrictive surroundings combined with the E2L8 soundtrack do give the map a nice gloomy ambience, but the overall impression is slightly generic. The author does have a knack for detailing, and there's plenty of good use of run-down industrial texturing and trimwork all-around. Lighting is good too if not particularly noticeable, but especially the outdoors with all that white against an orange backdrop caught my attention. The layout could've been less blocky and narrow though; aside from the village, the map consists of narrow linear paths connected to some more narrow linear paths. This could be very bad for combat, but that aspect of the map is pretty well balanced, and the layout allows for some good use of pipebombs and even the neglected tripbombs. The village is also a good spot for some enjoyable firefights toward the end of the map. 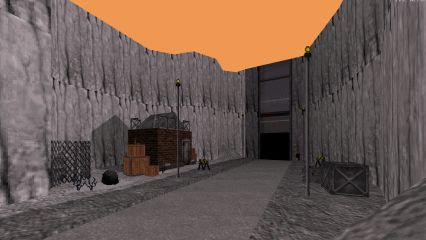 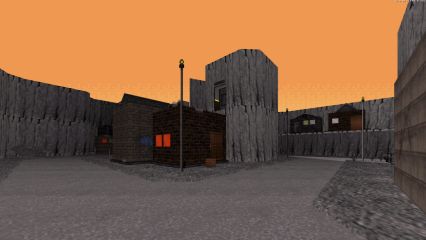