04.21.2017 Note: A new version of the map introduces a few enemies (Octabrains, Drones and Slimers to keep things consistent with the theme). The map's gameplay isn't radically changed; it's slightly more entertaining this way but also less eery. Unfortunately nothing has been done to improve the "core" gameplay which still revolves around looking for buttons. In fact, this time I couldn't find the last button at all.

The Review: This map is based on The Thing, a movie I have NOT seen (but I did see the awful 2011 prequel). In any case, I don't think I'm missing much since I'm familiar with more or less 90% of what happens in the movie. As for this map, it's not so much a map as it is, well, a collection of locations seen in the movie. There are no monsters (only some hints of such beings) and "gameplay" consists of trying to find nine switches that together open up a route to the basement. I must've spent ten minutes trying to find the last one but yeah, "gameplay" in the traditional sense is not the point of this map. But the map is not a Red-type spooky map either as it doesn't really rely on effects to make it interesting. In fact, the map is very plain but it still manages to make you a bit nervous. It is, however, one of the best-designed maps ever with incredibly detailed spritework and top-notch use of textures. And even with all the spritework and heavy texturing around, the map still manages to look pleasantly clean and polished.

Conclusion: Those looking for something cool to play with or monsters to shoot at should probably give this one a pass (or replay Stef's similarly named map instead; there's also this one). If you're into scary stuff you're probably better off replaying the Red series (or risking a heart attack with Slender's Woods). But if even an inch of your body has an appreciation for totally awesome design, or if you're a big fan of The Thing, then Outpost 31 is a must play. 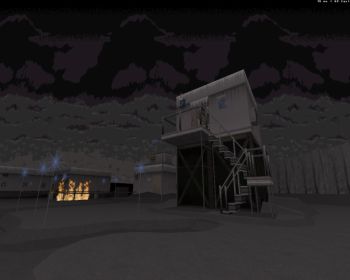