The Review: There's just no end to the end of the world as Duke makes his way through another cityscape filled with alien-induced destruction with deep ravines cutting across once-busy streets and towering skyscrapers collapsing before your very eyes. Like with the second part, there's a bit of "already seen it" going on in the third Shaky Grounds installment; in fact, for a short while the effect was pronounced as I had just played Woudrichem War only a few weeks earlier; while it's by the other Oostrum, the brothers' styles have never been far apart. But this isn't criticism, just an observation, for the map's design is top-notch in almost every regard with particular attention on its rich background scenery. If I had to raise a small issue, maybe a tad stronger use of shadows could have made the first street area seem a bit less bland with respect to lighting. Indoor lighting effects are much more effective with some particularly good use of colored lighting for the occasional dramatic effect.
The map's conventional first part is quickly over as you head toward an extended ending sequence, a joyride of spectacular sights and sounds as the city quite literally folds over. A surreal atmosphere sets in as Duke walks through a barren landscape, capturing a mood (enhanced by the map's atmospheric custom-made soundtrack) rarely felt in a Duke3D map.
Amidst all this there's fighting to be done as well. Outdoor combat is rather typical but still satisfying with plenty of easy-to-kill troopers and a few Pig Cops thrown in for flavor, while your short visit underground involves a tight battle against Protector Drones. Hitscanners never really become much of an issue, and the map makes good use of large-scale (but not too large!) battles in its second half. Being on the move and mindful of one's surroundings should help you avoid death; I was caught by a Drone's shrink blast a few times, but somehow managed to avoid getting crushed.

Conclusion: Design-wise the third in the Shaky Grounds series is just as eye-popping as its predecessors, but it's the few surprises toward the end of it that truly set it apart. More importantly, often-neglected (although never in a Merlijn map) atmosphere hits a high gear in the aptly-named Epicenter: if the second map ended somewhat abruptly, the third one ends on a somber, downbeat note as Duke heads toward the center of the aliens' armageddon machine - it's time to settle the score once and for all. 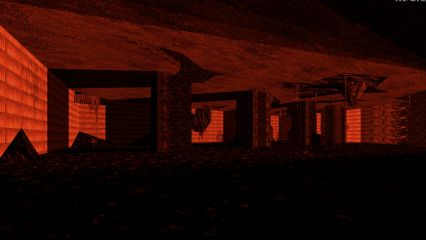 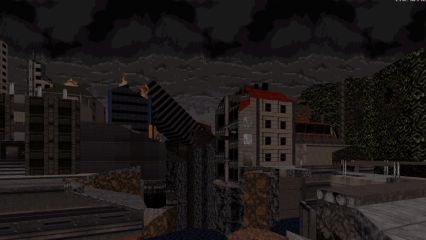