Description: A big open desert area with two temples, a network of caves, a coliseum and 723 aliens to kill.

Into It: From the start it should be stated that this map represents a map type, a "slaughter map", that I don't like - at all. In a map of this type you spend 90% of your time shooting at enemies that always appear in massive numbers. I find these maps exhausting, not because of challenge but because of repetitiveness and lack of challenge. My mind struggles to stay engaged and I find the game playing itself. While the impressive monster count of 723 may seem like a mind-blowing challenge, I only once went below 40 hp, and even then I wasn't in any kind of real trouble. In fact, my number one constant concern were my own rockets hitting a tree or a Protector Drone near me as I was shooting while retreating. Most of the map is effectively one big open area where you're constantly holding down the fire key. There is a sense of relief and accomplishment as you empty a segment of enemies, but that relief is short-lived as, until you rip the final boss's head off, there'll always be more - and enemies tend to respawn to refill previously cleared areas anyway. Within the confines of its "gimmick", the map has its merits. The map does reward for proper use of weapons, making it possible to keep massive enemy numbers in check with the right weaponry lest you want to get overwhelmed. As you have little time to explore while constantly getting shot at, more ammo and health are always only a few steps away, and to my surprise hitscan enemies weren't the kind of a nuisance I was expecting them to be in an open map like this. Design is good with detailed terrain (most of it very horizontal) and plenty of trees that, weird enough, never really seemed to get in my way. The map's color palette with its brown terrain against an orange sky with some green thrown in for vegetation is particularly eye-catching; and, at least when terrain is tall enough to permit it, there's some strong use of lighting too.

Conclusion: The Lost World excels in what it tries to do, a non-stop slaughter map with almost a thousand monsters to kill, all in an environment tailor-made for this type of stuff. While many will certainly enjoy it, this type of gameplay just isn't my cup of tea. 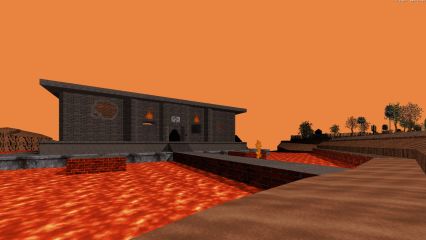 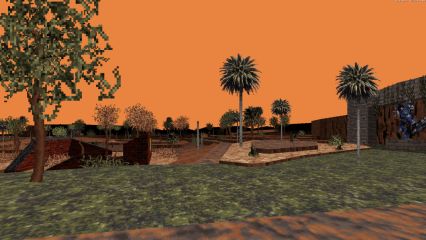