Finally, Sang's "Battlefield 3" has been review (it's been out for a few weeks now). You can get it from Hot Maps section under "Special Releases".

Happy Halloween! We don't celebrate Halloween in Finland but I intend to celebrate it by myself by watching "The Curse of Frank Black" - one of the best episodes of "Millennium" tv serie. I'm late but I'm here. Here's what happened: I installed Windows XP operating system and formatted my old hard-drive. As I was installing some FTP program to update the site I noticed that I don't remember the password & login name for my FTP directory at Gamespy (and I couldn't find that information from my old mailbox, which I had stored, either). I couldn't update the site so I emailed techsupport. After some emails, my account was given a "reset" with new login names & passwords. I'm still unable to access Fileplanet to upload zips.

We shall begin this new "chapter" by providing Duke fans across the world something to play with. Conveniently, Ryan "I rather abandon than release" Quakis released a brand new Duke level today. It's called "Simple Minded" and it's a hottie. Get it here.

There's more to come: Within a few days, I'm going to update the site with some weapon/monster models, Sang's Battlefield 3 and more.

Here's what I wrote on 4th of October, the day I was supposed to update but noticed that I can't:
Finally got my hands on WinXP - I know I'm late - four years late? Anyways it's a lot nicer now that my computer is clearly more stable. I also added 512 of ram and new games (HL2, CS: S & Doom 3) play a lot better now. I started to replay both HL2 & Doom 3 from the beginning (I still think that Doom 3 is a tad better). I lost all my Firefox favorites so I have to dig through some old emails to find my gamespy file-upload password & login. I'll be uploading some maps shortly - such as "Agent 007" & an updated (& improved) version of Retrospective. Sang's Battlefield 3 should be out shortly. I've been answering to all your questions about Fileplanet & installing 3d-models. So if you still got any questions feel free to shoot me with them. I know that Fileplanet has been acting strange - dunno if it's just a tactic to make people buy it BUT just so that you understand: Fileplanet is absolutely free. Two most common problems are 1)You have not registered (this is free) 2)You have to log-out & then log-in.

Finally found the time to play & review Iggy's "Moonbase". The level is huge and took me almost an hour to complete. It's a hottie with a score of 92.

Sorry for the lack dudes! I rewrote the Fusion TC review. Check it out and play the game in case you missed it years ago.

Also if you have (still) any trouble accessing the site or Fileplanet email me.

Revisited some good old Total Conversions and was forced to rewrite some of the old reviews. First - "Time" (demo) review got rewritten completely and I updated the download link (points to a working FTP directory now). "Pray Your Prayers 2000" review got partly rewritten and I fixed some grammar errors - download link updated. Check 'em both out!

Updated "Upcoming Maps" with "Survival TC" & "Return to Black Mesa" and updated some release dates for previous entries (they just keep slipping away).

Fileplanet: A bunch of you have attacked me with emails saying that accessing Fileplanet takes you back to Fileplanet mainpage instead of letting you to download the file you want. Do this: copy & paste the download url instead of clicking the link. Hope that helps.

As you can see we have a new poll. The previous poll question was: "Are you able to run Duke3D without Jonof or EDuke?" Here's how you voted: 32% answered that they can run Duke3D fine without any ports, 18% answered that they experience difficulties when running Duke without ports but can still run it, 23% can't run Duke without ports at all and 27% claimed that they don't know what Jonof & EDuke are (that's the "I'm an idiot" option). So guys - those of you who're not yet familiar with Jonof's port - now it's time to check it out. Jonof's port has become an essential part of playing Duke since new operating systems are not perfectly (or not at all) compatible with the good old Dos Duke 3D. There were 512 votes.

New poll is dying to know what is your favorite map by Fakir (and if you're one of the three people who are not familiar with Fakir's work then click the links within the poll to try out his levels). Fakir also deserves to be praised for updating my blog avatar a bit. Also check Fakir3D for some updates.

I also fixed the menu links - they won't open in a new window anymore. Can't believe how long it took to get something so simple work properly.

Anyways, remember me talking about those huge LAN-parties which were held in the capital of Finland some weeks ago? Here are some pictures I took:

-The bus has arrived and ready to take off (I'm NOT in the picture)
-The Arena (Ice Hockey) from outside
-People slept in the hallways (the upmost floor and spectator area was reserved for sleepers)
-Some scenery next to the arena
-Lights out, thousands of monitors glowing in the dark
-On the fourth day, people are packing things and ready to leave

Two new reviews have surfaced! "Subsuelo" scored 88 and can be found from "Hot Maps" and "Redevil (Resident Evil)" (uploaded here about two weeks ago) scored 71 at "Maps" section.

Numan's Beerzity is out. Check the review & download the level here (Hot Maps). 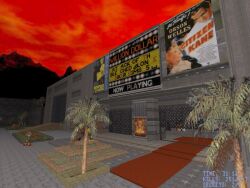 Sorry for the delays but I have been busy. There have been some releases but I have been gone. I was at this major LAN-party event called Assembly -05 which was held in Helsinki (that's the main capital of Finland) from thursday to sunday. I will also leave today and return on monday so be patient.

I uploaded some maps to Fileplanet (and no you don't have to pay any freaking money) which will be reviewed once I get back. Have fun with them while I'm gone:
Redevil (a Duke3D map based on Resident Evil - check the author's site here)
1House (standard Dukematch map from the grave)
Moonbase (huge moonbase - over 700 kilobytes! - Requires Jonof. Button pointing to the author's site added to "The Coalition") 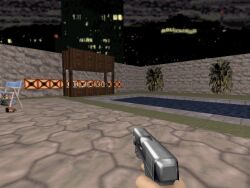 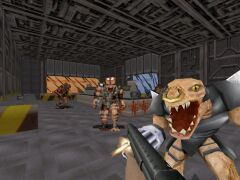 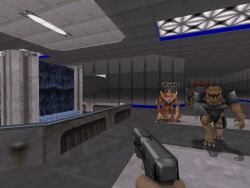 Have fun and check back next week!