I actually wrote a review for this one years ago but never posted it. Anywayz, after watching the Anaheim - Ottawa game (it's 7 am now) I decided to give this particular Quest a new try since it got some new attention at AMC. So, check my review of Quest for Hussein and download the add-on, which, by the way, is actually a standalone game!

Industrial Devolution by Thedutchjelle is out and reviewed!

CBP7 added to Hot Maps. Also, thanks Quakis for reviewing it.

Don't forget to check Duke4Ever.net for some brand new reviews.

Update (7th of May): A new mirror added for those who don't use Fileplanet or can't get the file from AMC. Thanks Duke4Ever.

The seventh CBP is out! I'm a bit too lazy to comment/review now but here are two links if you wish to get the level right now. A review will follow later: Download, Download (Filplanet), Download (Duke4Ever). 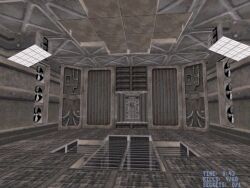 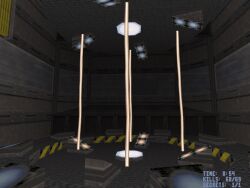 Another MSDN year is behind and as of now, we're 8 years old. I have been playing Duke for more than ten years. Check the old "6 Duke years" article for more info on the past. The article is old and full of bad English, but a new one will be written - two years from now when MSDN turns 10! Hopefully by that time MSDN can finally switch its name to MSDNF (yeah, right).

And a joke mod by Geoffrey ("Fakir") and James Stanfield, the gayest mod ever, HardG.

I always seem to be late with these "classic" TCs but here's one - Murder: The EDF Conspiracy. Thanks Telee for pointing it out.

We're heading toward the 21st day of April, which marks our amazing anniversary. So - don't forget!

"Out of the Grave" continues with a space map that should have been reviewed/released at MSDN years ago. "V5" is the name of this classic and it scored 93. Check Hot Maps.