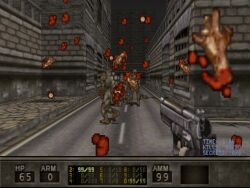 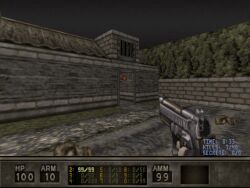 Hudson & Fakir have put together a simple six-level mini-mod. In all fairness this should not be considered a Duke3D mod but rather a game of its own built using the Build engine so I'm not going to be judging it for the lack of stuff you'd expect to find from a Duke3D mod. You don't need Duke3D to play Zombie Crisis.

Anywayz, fasten your seat belts and prepare for a zombie slaughterfest! The game sticks with a simple pattern through all of its six levels: you move, you push a few buttons and you kill. There are no secret places, no alternative routes, no keys, no spritework, no special effects - nothing but you & tons of zombies. This keeps the mod simple and fun, for a while, but it also makes you expect more. I was constantly expecting to get my hands on a new weapon (you get two - a pistol and a chainsaw) around the corner or to meet maybe a new type of enemy (there is just one - a slow, zombie that attacks in packs and poses no actual threat due to its lack of aggression).

Due to the fact that there are plenty of enemies, just two weapons and the difficult level is low the game gets very repetitive. If you like all those Doom mods with plenty of things to shoot at then you're going to like this. If you're like me, I suggest you play this on easy just to lessen the amount of repetition. However, it's not as basic as it sounds. Geoffrey (Fakir) has given the game a very cool retro look and sound! The levels look pretty good, which is quite an achievement considering how there are almost no details at all - just Geoffrey's kick-ass texture set and some simple but practical level design. However, I was a bit disappointed with the last three levels after some more colorful outdoor levels.

Conclusion: What this mod gives you depends on whether you're into this type of gameplay. I got bored after a few minutes and luckily it didn't last too long after that (the whole thing is around 20 minutes long). The game's graphical look and soundtrack provided most of the fun I was able to squeeze out of Zombie Crisis. 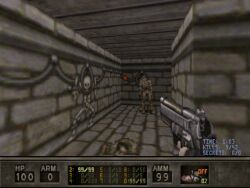 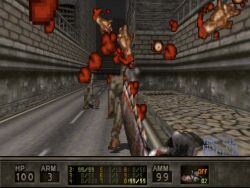