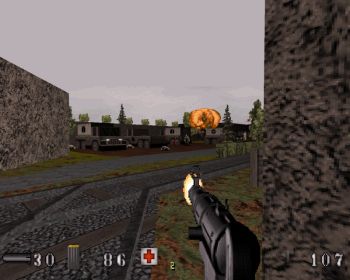 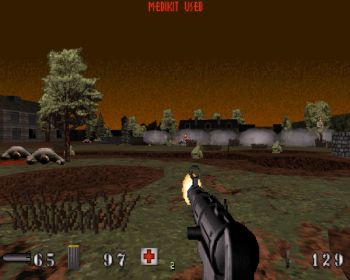 World War 2 G.I. is another commercial Duke3D Total Conversion from the creators of NAM. It's also the last commercial Build-engine game. More interestingly, its source code served as a base for EDuke, which in turn serves as a base (along with JFDuke) for the modern EDuke32. Despite my limited knowledge of coding, this actually becomes apparent as you play: The game relies on several features that would not have been possible in classic Duke3D Total Conversions.

In the mod you're an American "G.I." whose journey into Nazi-occupied Europe begins with the D-Day Normandy landings, a scene that was recreated in several war games (this, Unreal Tournament, RTCW, Medal of Honor) following the release of Saving Private Ryan whose opening scene is still one of the most brutal, graphic and intense depictions of battle in the history of cinema. In G.I. the scene is better described as "fucking tedious", as it makes you feel the real veterans of Normandy had it relatively easy compared to you because at least their war ended when they took a hit whileas you're expected to keep doing the same thing over and over again. Here one misstep will result in an immediate KIA. If you try to take it carefully you'll get blown to pieces anyway either by random artillery fire or an enemy you never even saw shooting at you from halfway across the map.

After this brutal opening the TC levels off a little bit. In general there seemed to be less mines, artillery bombardments and airstrikes than in NAM, but it still ends up being pretty annoying. Enemies feel even more accurate than they did in NAM, they tend to spawn behind you and are often found hidden in nasty corners. Your health gets drained at a rate that'd make a French retreat seem slow in comparison. These issues are exacerbated by a "feature" of the Build engine whereby you cannot shoot the enemy until its AI is active, which should be when they see you but this doesn't always happen even when you're staring directly at them. Thus, the enemy has a nasty habit of getting to make the first move. To add insult to injury, the game introduces an unnecessary health system whereby health pickups are stored in your inventory to be used manually whenever you want. However, it takes a whopping 15 seconds for the healing process to finish, and if you move during this the healing stops and you lose the kit. They probably tried to simulate having to attend to your wounds in the midst of combat, but since the game is an oldskool shooter otherwise, this feature is nothing but an annoyance (especially since you'll be doing it all the time). In practice it's like an annoying version of CoD style health regeneration whereby you jump from cover to cover in order to heal. To be sure, the game is fun when you're not healing. This is because the weapons are largely satisfying; they sound great and kill quickly. It's just that all the dying and healing tend to get in the way.

Maps are kinda similar to NAM with its locations consisting of countryside, small villages, forests and ruined cities, mixed with heavy use of well-made military assets. It's fairly basic stuff by modern standards but overall the mappers did a good job at bringing the Western Front come alive in such an ancient engine. At the same time you probably have to be a fan of the Build engine in order to appreciate some of the scenery, like beautiful shots of the French countryside against various mood-enhancing skies. (But then again if you're not a fan of the Build engine then what are you doing here?) There are objectives, which are a nice use of the new engine capabilities, but often you have no idea what you're supposed to do because the briefing was delivered in a low volume while loud bombardments were polluting the audio channel. In some missions you have to escort NPCs, or rely on them for support, but their AI is extremely primitive.

Conclusion: It's a good thing for us that TNT Team still seemed to have faith in the Build engine even months after the release of Half-Life. In many ways World War 2 G.I. and NAM were filling a void within a genre that was not too keen on realism at that time, perhaps even paving the way for the many realistic military shooters that soon followed. However, while I don't have any trouble with the game's "dated" visuals (if I did, this site wouldn't exist), it's hard to figure out where exactly the tedious gameplay is meant to fit in. The game's hitscan mechanics and the engine's AI-related idiosyncracies combined with the new health pickup system result in an experience that's irritating more often than not. 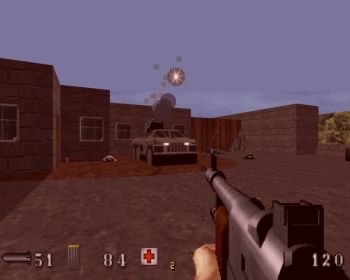 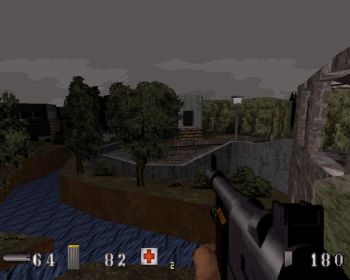