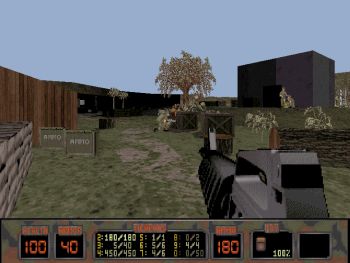 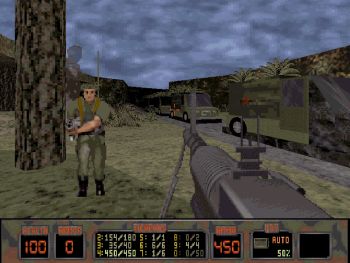 The Vietnam War may have been a military defeat but it spawned products of great cultural value such as Apocalypse Now (I prefer the longer "Redux" version which has the French plantation scene) and Full Metal Jacket, which are among my all-time favorite movies. While these movies were ambigious, even critical of America's involvement, right-wingers such as Golan-Globus in turn dealt with their traumas by sending men like Chuck Norris to bring the war to a happier conclusion. In NAM, you get to answer the question Rambo asked Colonel Trautman in Rambo 2: "Sir, do we get to win this time?"

NAM is a commercial Duke3D Total Conversion, released back in 1998. The Build engine was considered ancient technology already in 1998 but it seems that at least some people still had faith in its commercial viability. NAM was made by TNT Team, the mostly Finnish developers responsible for the classic Platoon TC. (TNT Team is not to be confused with TeamTNT, the guys who made Evilution, the first megawad in Final Doom.) NAM reuses a lot of assets from both their own Platoon TC and Duke3D itself, but throws in a lot of new assets as well for a more authentic military-shooter experience. NAM consists of two single-player episodes with a total of 16 maps, and two multiplayer episodes.

TNT Team has done a great job in crafting credible jungle environments with the Build engine. The environments still strike as beautiful, even varied, with waterfalls and thick vegetation covered in pleasing hues of green. Despite the potential to throw the player's sense of navigation off, map layouts in NAM are pretty straightforward (while generous with optional routes) rather than maze-like, at least so long as you remember to rely on the automap. Even though the environments are quite similar across the maps, repetition doesn't really get to set in: There's always something interesting just around the corner. In Payback Time, one of my favorite maps, there are around ten references to the movie Predator, another all-time favorite. In fact, the map follows the movie's script pretty linearly. (Also keep your eyes open for the creature's landing pod in Night Hunters, the preceding map.) Military assets such as forts, vehicles and other weaponry are all solid work, and everything blends in well together despite the recycling of some Duke3D assets. There are airstrikes, setpieces and friendly NPCs, even though the latter are pretty basic but still good for immersion. Even voice acting is solid for its time. Night maps are a bit of a pain if you're not playing this in darkness: NVGs seemed to be available for one mission only even though they should have been given for all night-time maps.

The game's biggest problems are related to its difficulty. The first episode in particular is littered with landmines that are often hard to spot. Then there are airstrikes, mortar strikes and artillery fire you need to watch out for, except often avoiding these is a matter of luck: Even when you hear the shells incoming, running is often just as risky as staying put (the sound effects don't seem localised so you wouldn't know where the bombs are going to land). Forget about the Viet Cong and the NVA: Often it's American bombs you need to fear the most. Combat in the game is satisfying; almost every weapon is deadly, particularly the M16 rifle which replaces the pistol but retains its deadly hitscan accuracy. But even here the enemy has the advantage; they can spot you through thick foliage way before you have any chance of spotting them, so you just end up shooting in their general direction, hoping to hit something. (To be sure, this is how it often was in Vietnam, but this is a game and in the game the enemy can actually see through opaque sprites while you cannot.) I'd highly recommend playing this on the easiest skill setting to compensate for all the random damage you're in for.

Conclusion: The game probably didn't make a lot of commercial sense at a time when both Quake 2 and Unreal were already out, but as a Duke3D Total Conversion NAM is a high-quality piece of work with great use of its assets to forge a convincing jungle warfare environment. Gameplay-wise it can be both very satisfying and highly irritating, but saving often and advancing cautiously are your keys to success. The Steam version runs through DOSBox which seemed to work fine here with the usual keyboard-mouse controls, but you should be able to run it through EDuke32 as well. Well worth checking out, although probably not at its current listed price (6,99€). 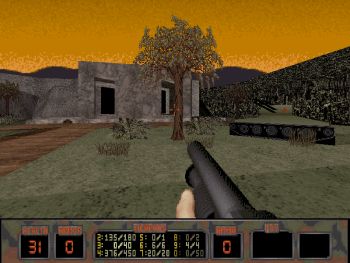 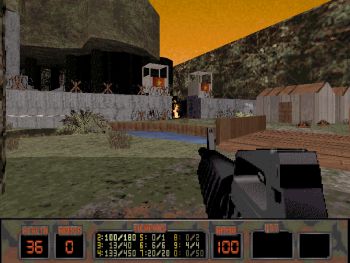