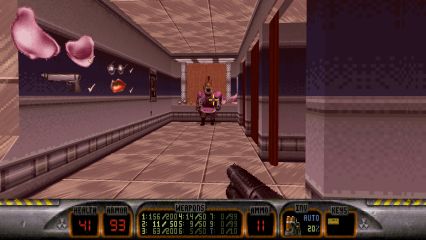 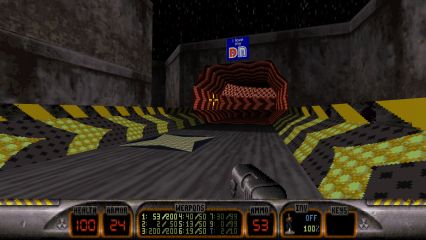 PlayStation got its Duke3D port in 1997: this was at a time when first-person shooters weren't really popular on consoles due to persistent framerate & controller issues. Total Meltdown includes the three original episodes plus Plug 'N' Pray, a brand new episode. Back in the day I was really excited to try out the new episode, but like so many others I got stuck in the very first map. Now it's 2018 and Total Meltdown has finally been made available as an EDuke32 mod. This review is almost exclusively limited to the new episode; unlike on the Nintendo 64 port, the first three episodes are pretty much identical to their PC counterparts.

The episode starts off with Nightmare Zone, a Tomb Raider inspired map. This is probably the most notorious map in the history of Duke3D. It's pretty difficult to navigate, you get stuck constantly trying to find buttons to press and there are lots of nasty tripbomb traps everywhere. Considering the awful framerate & controls on the PSX version, it's probably fair to estimate that less than 10% of Total Meltdown players ever got past this first map.
The second map, Trackside Tragedy, is at least thematically more interesting, centered around a racetrack (inspired by Wipeout, another PSX classic). The developers have made good use of Duke's texture set here in creating the futuristic racetrack. The map's indoor bits seem a bit lacking in comparison, but at least the map's got a unique vibe, as if Duke is visiting another video game.
The third map, Gates Motel, borrows its influence from the likes of The Shining. After a dozen or so mansion-themed horror maps the Gates Motel doesn't really stand out, but it's still got a decent ambience and a whole bunch of horror-movie references. It's also somewhat easy to get lost in the sprawling mansion; in fact, I had to consult a walkthrough at one point, being unaware that a switch labeled "Library exit" had unlocked another door further away.
The fourth map is the Quentin Tarantino map, Duke Royale. Aaro Ruohonen released his own version of the map less than two years ago, so check out the review here; the maps are pretty much identical in terms of design.
Alien Rendezvouz, the fifth map, is the most traditional of the bunch in not being centered around a popular culture reference. It's a mix of E2 and city themes and also the most underwhelming of the bunch (aside from a cool scene near the end where an alien ship lands). The episode's secret level can be found here, but taking the secret exit (which is pretty hard to miss) cuts off a significant portion of the map and only leads to the familiar (and rather awful) Faces of Death.
The last map, Ministry of Fear, is the weirdest of the bunch. Either it's a disco built by the aliens (for the aliens) or a disco taken over by the aliens, but it's got everything from dancing aliens to alien DJs. There's a nice little effect whereby the music changes a little bit depending on your closeness to the main dance floor area. The episode's boss is a rather cheap retextured Battlelord, but I like how the battle arena can be expanded if you find the first area too enclosed.

Overall the quality of the episode is pretty average, noticeably above the quality of 1997 usermaps but at the same time clearly below the works of Allen H. Blum & Levelord. There isn't a whole lot in the way of details in the new maps, but at least lighting and texturing are decent. The maps have interconnected layouts reminiscent of the 3DRealms originals but they also suffer from several annoyances such as fuck-you tripbomb traps. Weird enough I found the maps surprisingly challenging, particularly Alien Rendezvous with its lack of cover and abundance of hitscan enemies such as Enforcers (there are way too many of these in general) and Battlelords. Several small changes also caught me off guard, such as Sentry Drones that now seem to take three shotgun blasts before exploding. Mad props to anyone who managed to play through the maps back in the day using a PSX controller. Music is great throughout the episode; in fact, it wouldn't surprise me if the prominent soundtrack is one reason why the new maps seem to lack ambient sounds. (It's also worth taking a look at the original maps as they too seem to have new tracks.)

Conclusion: I haven't had the chance to play the PSX version since the late '90s, so I cannot really assess how close this EDuke32 mod is to the original, but knowing Fox it's probably fair to once again describe the results as meticulous. Some might not appreciate such devotion to the original material and would prefer a polished version of the PSX Duke, but the attempt here is to recreate the PSX experience, only without the rather overwhelming controller & framerate issues. The Plug 'N' Pray episode is well worth playing; it may not be technically impressive by any standard, but its focus on specific references and themes is something that should maintain your interest. 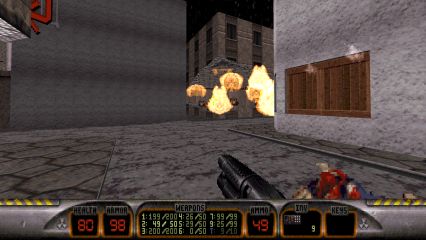 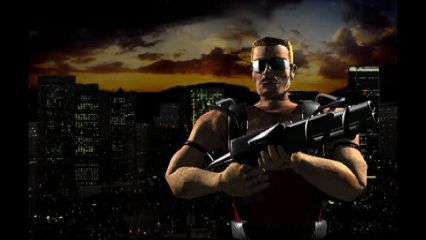