Sanek treated us with his Candy Mania "game" about a year ago. In Candy Mania the player collected candy while evading various hazards in colorful environments reminiscent of retro platformers. SilverballZ, Sanek's new "game", doesn't exactly reinvent the wheel. In fact, at its core it's a "retextured" Candy Mania where candy has been replaced with silver balls, the bees and hornets with functionally identical spinning objects, and the maps are made pretty much of the same colored blocks.

A few new hazards and features have been added. Sanek now makes better use of moving sectors, and there are jumppads to spring you around. The jumppads work pretty well and Sanek makes good use of them, but they have a bit of the same "landing" problem as the clouds in Candy Mania: the pads seem to cover the blocks they're on entirely, but you can actually land on the edges of the block and fall off. The most challenging of the new hazards are star projectiles that call for careful timing and patience. As in Candy Mania, the last map puts you to the test for everything you've learned up until that point. Also, in comparison to its spiritual predecessor, the maps are larger, better designed and more expansive; at least I felt the game gave me more freedom of movement than the more linear Candy Mania.

SilverballZ relies on pickable checkpoints just like Candy Mania. Again, this is good in principle because you can't have a puzzle game that calls for patience and then let the player impatiently savescum his way to victory. However, the placement of checkpoints in SilverballZ can be quite uneven. Some of the more "optional" ones are often left in simply-not-worth-bothering places, while at other times the author probably had some optimal route in mind when placing the save points, but that route becomes apparent only after the fact. The penultimate map in particular had some truly infuriating segments (not to mention I spent quite a while looking for a few missing balls).
When combined with the engine's slippery controls and being unable to look up or down without getting a distorted view, the checkpoint system should be better spread out. Your own faults and "tilting" aside, nothing pisses you off more than having just finished a major segment only to fall off a simple platform because "Duke" is so slippery and cannot properly see where he's landing.

The game has a new soundtrack courtesy of Brandon "MusicallyInspired" Blume. It's quite fitting, being neither too retro nor too contemporary, and a few tracks may fiendishly get stuck in your head for several hours. (You can also buy the soundtrack here.) The minimalistic menu design, a plague unleashed upon mankind by Zykov Eddy, is back, unfortunately, but at least this time around you can flip the mouse vertical axis without having to edit some txt file.

Conclusion: While SilverballZ gets no points for originality, it's still a fun experience with its steadily rising challenge and refreshing visuals and soundscape. It tries to, with some success, one-up Candy Mania with more expansive maps, but the flip side of having larger maps is the potential for more frustration arising from the uneven distribution of checkpoints and the engine's idiosyncrasies. 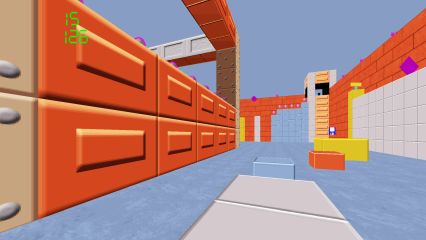 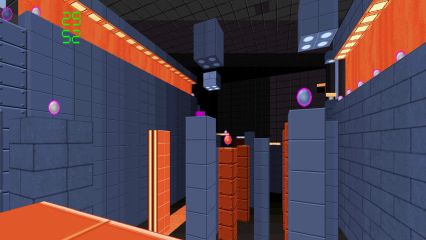