In Candy Mania your job is to collect candy until there's no candy left. The way you do this is by jumping from one platform to another while evading enemies. One could describe it as a first-person platformer Pac-Man. Simplicity is the key here; the gameplay never consists of anything but platforming and evasion. Being patient, mindful of enemy movement patterns and precise with your jumps gets you all the way to the end. Patience is especially important considering the lack of free manual saving, which is fitting for a game of this sort. Instead of free saving, there are a few floppy disks lying around that save the game when collected. During the 8- and 16-bit eras you learned to be patient because the lack of manual saving often meant that a single mishap could lead to losing all your progress. Candy Mania is treading a fine line in terms of balance: being able to save after every successful jump would throw it off completely.

Despite being mostly fair and balanced, the game does throw small annoyances at you every now and then, such as slightly slippery surfaces (a feature of the engine), clouds having less surface area to land on than it'd seem (invisible flat sprites could've alleviated this problem) and having to wait a bit too long in specific bits for a platform to arrive. But overall the challenge is fair and increases at a steady pace, with the finale (ironically the only map I finished on the first attempt) wrapping things up in a manner appropriate to the game's spirit. The simple concept behind Candy Mania can only get you so far without starting to repeat itself, but the maps aren't too long for their own sake and the entire mod can be finished in less than 20 minutes.

The game's presentation is excellent with its small but appropriate selection of a few simple colors and sound effects, true to the game's early '90s spirit. But there's some sloppiness too: A few of the menus are a one-way street and you can't configure controls except by modifying settings.cfg. At the very least there should have been an option to invert the mouse axis. (Use in_mouseflip 0 either in the config file or console to do this.)

Conclusion: Candy Mania is a fun and pleasantly challenging "mod" with a good selection of textures, sound effects and music to give it its "candy" flavor, but the impatient will definitely find it less enjoyable. The simplistic concept works within the confines of its short length, but the concept could be developed even further with stuff such as difficulty-level-dependent time limits and save points.

12.29.2017 note: The author released a Christmas themed map for the 2017 Christmas season. Aside from the obligatory holiday references, the map looks and plays pretty much like many in the base game. Jumping is a little bit easier, but there's a bit too much of it. Fortunately the first section of the map has more space for the player to move around, but this comes at a cost to challenge. 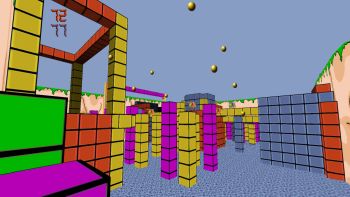 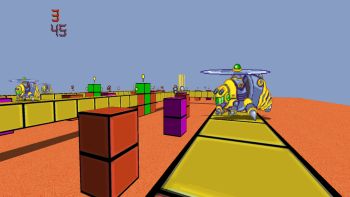