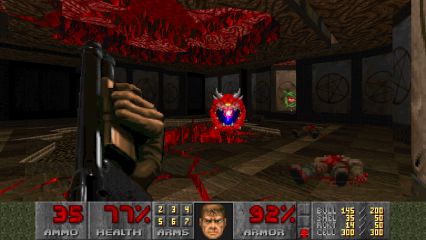 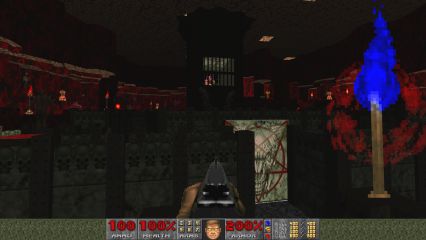 After years of wandering in the wilderness, John Romero has returned to his roots. SIGIL is a new fifth episode to The Ultimate Doom, taking place right before the events of Doom 2 (although whether the episode is canonical is open to interpretation; to my knowledge SIGIL is still "just" a user-made episode, not an official, licensed product). As a continuation of the original four episodes, SIGIL makes no use of the much-larger monster selection of Doom 2 (which to me is still the definitive Doom game). Rather, SIGIL is really close to the feel and difficulty of Thy Flesh Consumed, easily the best of the four Ultimate Doom episodes.

I played through SIGIL twice, first on Hurt Me Plenty, then on Ultraviolence. The episode is quite hard, largely due to the same reason that made Romero's Thy Flesh Consumed maps (E4M2 and E4M6) so hard; restricting the player's ability to move sideways. Basically every map (of which there are nine) in SIGIL consists of narrow passageways that severely curtail your ability to strafe to dodge incoming projectiles and outmaneuvre the enemy. This comes as a bit of a shock because of how common circlestrafing has become in shooters, but the original Doom was never designed with circlestrafing in mind, and it seems that Romero wanted to go back to that. In that, he succeeded: playing SIGIL in 2019 feels like playing Thy Flesh Consumed for the first time (which was in summer 1997 in my case). It may be frustrating (how could it not be?), but it certainly makes the maps far more challenging in a more inspired way than today's boring megawads with their incessant, unimaginative monster spam that is more tedious than challenging. Playing these maps on a high difficulty setting also makes you appreciate a certain long-forgotten skill; knowing when to retreat. Still, there are many moments where Romero puts you in a "fuck you" type of situation at a moment's notice, which may smack some as unfair, but it's nothing a simple quickload won't alleviate. 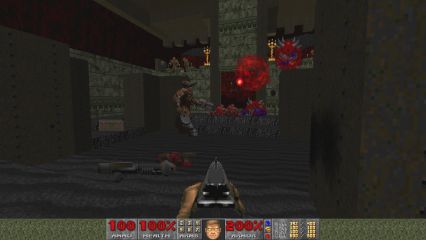 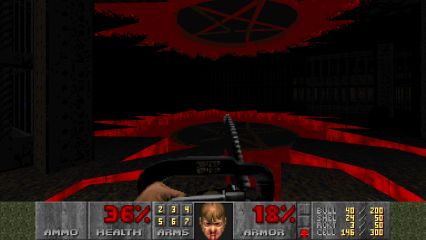 Other factors too influence the high difficulty level in SIGIL. Most maps rely on segments that are very dark; in fact, I had to increase the brightness level to be able to play this in the middle of the day. This, not or barely being able to see the enemy, is a rather cheap and annoying way of making the game harder. Utilizing darkness to make combat more difficult feels more like something that interferes with the gameplay rather than something that'd add to the experience. Moreover, at least to me the issue rendered some maps (such as E5M5 and E5M6) unplayable until after sunset.
SIGIL is also quite stingy with respect to ammo and health. On both playthroughs I was pretty much out of bullets by Abaddon's Void (E5M5). But all is good, for this only made me rediscover the usefulness of the chainsaw; it's amazing how much ammo you can save by killing a few Lost Souls and Cacodemons with the chainsaw. Also bear in mind the usefulness of pitting monsters against each other, for which there are plenty of opportunities in these cramped corridors. And while you'll miss the double-barreled shotgun, coming across a plasma gun or a rocket launcher is as if you're acquiring these guns for the first time; they make dealing especially with Barons of Hell much easier, so spare those cells and rockets for when you really need them.

I also like how the maps, while noticeably behind modern usermaps in terms of raw detailing and trimwork (and such design would feel out of place in a release like this anyway), have all these little ideas that give the maps a distinct feel. Granted, the use of a certain eye sprite as a shootable trigger gets a bit excessive and the by-now infamous "crusher maze" in Paths of Wretchedness (E5M4) just makes you want to IDCLIP your way through it, but at least SIGIL never gets dull the way your typical modern 32-map megawad does. On high difficulty levels maps like Unspeakable Persecution (E5M6) and The Realm of Iblis (E5M9) make great use of Cyberdemons as big moving obstacles that you better avoid. The Cyberdemon at the end of Episode 2 was always a bit terrifying, and I'm glad Romero has returned these monsters to their rightful place as something to be feared. The episode could have used a bit more thematic separation between it and the rest of the episodes though; now it's a bit of a mishmash of episodes 3 and 4 of The Ultimate Doom. Also, taken together, the maps are all medium-size at most and none really feels as sprawling and epic as some of Romero's classic maps, and the ending is memorable only in being rather abrupt and odd.

This being a Doom episode, high expectations for music are in order. SIGIL's soundtrack comes in two flavors. First is a more traditional midi soundtrack by "Jimmy". It's solid work with a definitive Doom vibe, although I didn't find any track particularly memorable (nostalgia, or lack of it, may play a part), but there were a few good tunes, especially the quieter ones. The second soundtrack is an exclusive for those who paid money for the game soundtrack. I'm sure the guy who composed the MP3 soundtrack is a very capable musician, but I detest heavy-metal music and found the first few tracks something I'd expect to find from a school shooter's playlist. It does get more melodic and enjoyable starting from E5M4 though, so checking out the "Buckethead" soundtrack may be worth a playthrough.

Conclusion: I could never get into the Doom usermapping scene; while the productive community keeps churning out maps and megawads that look amazing, their overreliance on massive amounts of monsters make for a dull gameplay experience time after time. SIGIL, while not light on monsters, emphasizes long-forgotten means to make its maps feel exhilarating and engaging. There are annoyances, and the maps could be bigger and look thematically more unique, but I enjoyed the sheer challenge they offered along with Romero's self-confident presentation of his new episode. 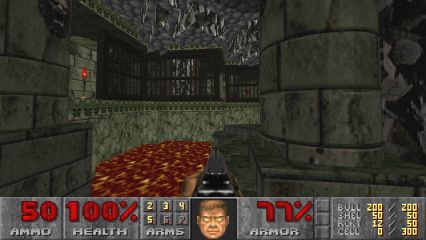