GRINS OF DIVINITY TC BY FATHER MARROW & THE TEAM 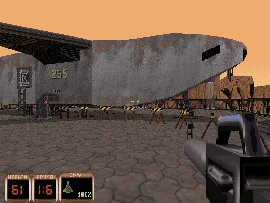 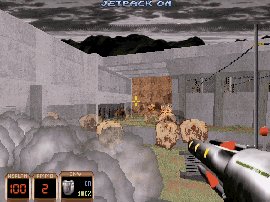 'Grins Of Divinity' is one of the biggest DN3D projects ever. Story, comic, huge team and the TC itself makes this a piece of DN3D history. GOD will include three episodes - first released part "SYSTEM SOL INVADED" - episode 1 has 10 levels and lots of other great stuff.

-Levels:
As I have mentioned many times before GOD TC has the most unique looking levels. They are full of new art and effects. First level is no-enemy level - Since 'Unreal' many games have had these kind of walk-through levels. This one has time limit which isn't a very good idea because it's four minutes and it takes only 1 minute to run through level. Second level is a very good looking dam. The design is great but the level is too easy and you won't find any difficulties (secret level is here). 'Leaving Town' is a bigger level - it's an airport with really nice design too. After this you'll find yourself fighting your way through an aeroplane. Small but nice level with only a few enemies - plane itself looks quite realistic. After crashing through the walls of the Whitehouse you encounter some enemies in a city which looks more like an original Duke3D level. Level is detailed and fun. After this comes the final when you arrive at Area51-type-top-secret-facility. Good desert level - craft in the end looks great. TC also has a secret level which is my favorite (blue-colored level with CIA troops), a shopping map, training map and very detailed industrial type dukematch level.
Score 8˝/10

-Enemies:
Enemies are standard quality. Not as good as in 'SST TC' or 'Chimera' but average anyway. Normal enemy which can be compared to Duke3D's trooper is a yellow haired little creature. Shoots rarely and it's hard to hit (which is annoying - you'll lost lots of bullets in these). CIA troop is like a pigcop. Then there's this bigger creature which might cause a game crash because of its weapon. You'll see a flying drone in two levels and some paratroopers. Then of course we have civilians. Art is average and you can shoot them to steal their moneys (good idea) but sometimes civilians just stop and animation looks not so smooth. I also expected somekind of a civilian-talk sound like in 'SST TC' but GOD TC doesn't have that sound so now the world where you travel sounds too quiet.
Score 7/10 -Weapons:
Art is average - cons are very good. Shotgun, pistol, chaingun, m16 have got normal actions but other weapons are a bit more modified. RPG has now more firepower and is close to 'SST TC''s nuke. Plasma launcher is a nice weapon too but causes game crashes. TAM Gun is a freezer like gun which doesn't freeze the enemy but kills it.
Score 8/10 -Other:
Textures are mostly good and gives this TC a unique feel. TC doesn't use much original arts which is good thing in this TC (I usually consider original textures better but not in this add-on). Some of the textures do look messy and ugly but only a few. Sounds are quite good (with some nice talk-sequences too) but unfortunately I wasn't able to hear the background music because since I got my new PC my Duke hasn't been able to play music. GOD also has particle effects like water, smoke and blood and it looks smooth and very good. TC also has money which you can use to buy new weapons. This is a good idea and it works well. Episode has two places where you can buy weapons. You can find money from ATM machines and by shooting civilians. One bug is that you are not always able to pick up health packs and that sometimes enemies/weapons look huge when you see them from a far distance and once you get closer they shrink to normal size.
Score 9/10 Lastability: Very good episode with new effects, unique levels and average weapons/enemies:
WWW:http://www.planetduke.com/god/
Version: 1.4, 1.5
Author: Father Marrow & The team
Size: 11Mt
Score: 8 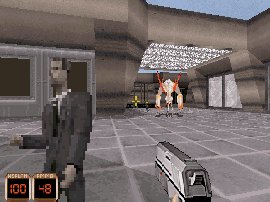 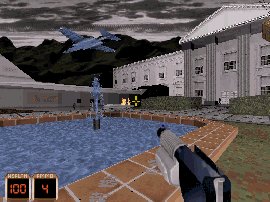