Back in Business by Alex Pistol 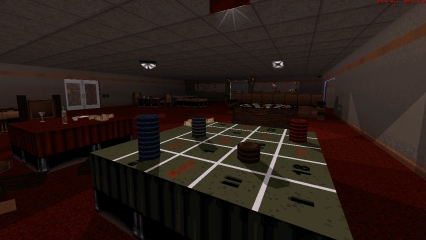 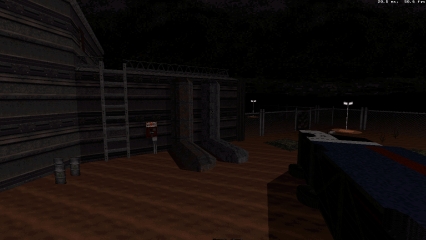 Note: To ensure all the effects work as intended, you should use a relatively recent EDuke32 snapshot to play Back in Business.

Alex Pistol is back, and along with his revival comes the revival of an episode he started working on nearly 20 years ago. I have distinct memories of waiting for this episode to be released, so the expression "better late than never" is quite appropriate here. As for the content, the episode consists of four new maps, each with a distinct theme and a corresponding briefing map. In fact, the author prefers that they be rated separately as usermaps, but then he should have released them as such. Each map has a set of missions you need to finish.

Casino Carnage: The "Lady Killer" is the casino that seems to have been in every iteration of Duke Nukem Forever (including ours). The aliens attack as Duke is about to open his casino for the night. Immediately it is clear that Alex hasn't lost his touch, as the map is filled with exemplary use of spritework and detailing teeming with creativity. New textures for the casino room spice up the place's visuals, and no corners have been cut with respect to the use of sprites; if an object could be made better looking with a pseudo-3d look, then it has been made so. Once you reach the street outside the casino, it becomes apparent how much attention has been put in the lively background scenery, as the city seems to stretch well beyond the gameplay area. While design is all-around 1st class, gameplay is another matter. The scale of the map is often simply too small to accommodate both the map's intricate detailing and its crowded combat. In fact, many areas were kind of a pain gameplay-wise because of a combination of constrained surroundings, lack of cover and picking the wrong kind of enemies for the occasion. While this is more or less a perennial problem throughout the map, the vault and the sewer areas with their narrow corridors where you're forced to battle were the most notorious offenders.

Mutant Mayhem: The second map takes place mostly within the walls of a research facility. Duke must locate two mutated aliens and destroy them. This time around design isn't as immediately eye-catching as in the first map, but that's due to the map's more generic hi-tech theme. Detailing is still very strong, and the map's use of stock textures is particularly creative, often making you go "why didn't I think of that before?" There are some neat gamelay-related tricks as well; in particular I enjoyed the sequences involving the mutated aliens. Again, I wish Duke had been given more space to move around, but gameplay felt at least slightly more balanced here due to a better placement and selection of enemies. Also, while the first outdoor area (which begins with a cool vehicle sequence) provided plenty of space to move around, cover was hard to come by and thus I entered facility grounds already badly bruised. Another gameplay related snag was the location of the red key: it was notably on my second playthrough that I must've spent ten minutes searching for the key until "finding" it hidden in a cramped location behind a desk. I never saw it on either playthrough, so I must've picked it up by accident on my first playthrough.

Freezing Fear: This is another hi-tech base, but now in a desolate snow-covered environment with some good-looking barren canyons in the distance. The corridors and rooms of the EDF base, under attack by the aliens, of course, are still much too narrow, but at least the placement of Pig Cops and Enforcers seemed a bit better this time around, and a lot of the map's combat is focused on a few larger areas. There are again specific missions you need to finish, so pay attention to hints. In particular you need to find datapads dropped by dead EDF agents. Not a bad idea in itself, but once I spent ten minutes looking for one that had information about a code needed to open a door; it turned out the body of an enemy I had killed earlier had landed right on top of the datapad, concealing it almost entirely. The last area is a large battleground and a scene of some nice scripted sequences, but the wave-based battle here suffered from timing issues; I was left with almost a minute of free time between each wave, which was enough to make me think I was missing something, so I went around hitting space until I noticed enemies spawning again. The map's ending seemed buggy as well, as I ended up getting killed out of nowhere several times rather than moving on to the next map. Still, the "story" elements with the accompanying setpieces in this map are pretty good and the map makes pretty good use of the facility's multi-level structure.

Piggish Prison: The fourth map begins with Duke stuck in a prison cell; in order to get out, he must MacGyver a bomb out of household items. This is the most recent of the maps and it shows: the detailing here is some of the best I've seen in more than 20 years of playing this game. There are so many cool creative ideas in every corner of the map that it'd be impossible to list them all here, but highlights include a bar in the main building and a workshop with all kinds of little gadgets. Moreover, the outdoor area has an atmospheric Wild West vibe to it with plenty of brown textures against a red dusk sky, a combination that always seems to do it for me. The main building itself is outstanding work, housing four intricately detailed floors that must've been a pain to build. As an icing on the cake, Morricone's The Good, the Bad and the Ugly theme is a perfect fit for this map.
Unfortunately, gameplay-wise this is one of the most miserable experiences I've ever had. The sheer amount of detailing crammed into much too small a space gets in the way all the damn time, especially amidst combat; the only reprieve from that was outdoors, but the worst-imaginable kind of enemy placement there presented another problem. Indoors I had to resort to constantly holding down the walk key to make navigation less tedious, as a tiny mishap meant running straight into a Pig Cop's shotgun, guaranteed to hide behind every corner. Later on in the main building there's a window that can be opened, but your angle has to be pretty specific for the trigger to work. Once the window is open, a Commander respawns right in front of you; this alone got me about four times, as I was desperately trying to squeeze myself through the window while getting pounded by rockets. Then, with less than 20 health and barely any bullets left I was forced outdoors to fight against respawned enemies, including tanks, Commanders and several Battlelords firing at you from elevated positions and no weapons to fight them with. Through excruciating trial and error I came across respawned supplies and eventually managed to finish off all the enemies. And as if I wasn't pissed off enough already by this point, climbing the guard towers scattered along the perimeter was a constant pain, and the bike that was meant to take me across a bridge at the very end took quite a few tries until it did what it was supposed to do and finally ended the map - to much relief.

Conclusion: While Back in Business has some of the best design yet and makes creative use of the game's assets, it's also a good example of how realistic scale combined with realistic, sprite-heavy detailing is not a good fit for this game - even Shadow Warrior suffered from this up to a point. If you're gonna go with this combination of scale and detailing, more thought needs to go into enemy placement and allocation of supplies. While fighting and moving in these tight surroundings is by far the episode's most considerable drawback, the other aspect of the gameplay, the one that involves solving puzzles & such, is more enjoyable. The maps are filled with creative ideas, some of which lead to you to falsely believe you're witnessing mere con trickery, but many of these effects seem to have been hand-crafted - and they make a good job of accommodating the episode's mission-oriented maps. Even so, it's not always exactly certain what the author intended, and it's pretty common to waste 10 minutes per map wandering around, not knowing what to do. Anyway, even with its issues Back in Business is well worth a look thanks to its creativity and excellent design; just brace yourselves for taking quite a few beatings on you way through it. 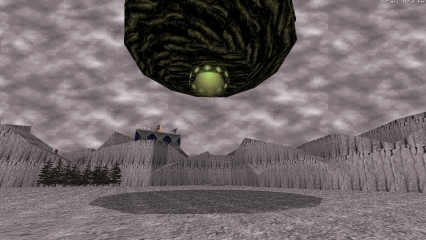 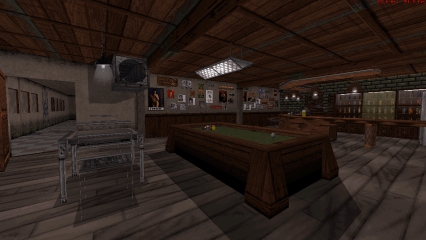