The AMC TC by the AMC Community

Note: I'm one of the authors of this TC so take the objectivity of this review with a grain on falt. The mod is standalone, i.e., Duke3D is not required.|

The Review: Duke Nukem is dead. The world is on the brink of collapse. Like Hitler, Alejandro of the AMC Community spots an opportunity in chaos and assembles a team of fanatics still playing a 16-year old game elite warriors to save the universe from some of the worst offenders mankind has ever known, including the demons of hell, cultists and environmentalists. The epic AMC TC brings together elements from past projects such as Imagination World, Brave New World and Oblivion, and fuses them with epic characters such as James Stanfield, Zaxtor Znort and yours truly. What results is a one-episode TC with such diversity that you'll never come across again (until AMC TC 2, that is!).

The amount of features this TC has will make your head spin, especially if you've been out of the scene for some time, missing all the latest EDuke32 developments. You've got cutscenes, selectable characters (each with his own weapons, special abilities etc.), driveable mechas and vehicles, virtual reality segments, researchable documents and artefacts, achievements, slowmo sequences, AI sidekicks that should make John Romero curse at his coders, weapon upgrades and tons more. 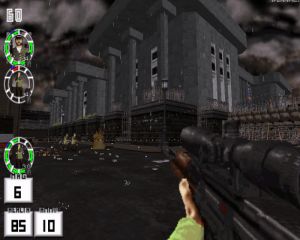 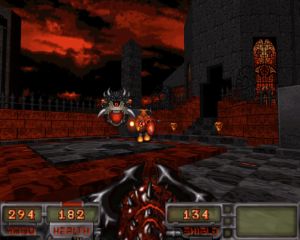 Of course none of these would mean much without levels to take advantage of them. In a single-player "campaign" that's at least as big as that of any recent Call of Duty game, all the new features have been integrated seamlessly, none feeling forced or useless (well, there were a few minor things that I personally disliked). The events that unfold as you play are tied not just to the ongoing story but also the background universe that's constantly present: It's this aspect that keeps the experience compact and consistent while your surroundings may change dramatically along with some gameplay mechanics. Before you dive into the campaign, you get to explore the AMC base a bit, as it packs quite a lot of things to see (including a city skyline unlike anything you've seen before), some of which make more sense the second time you visit the base.

What once was FBSP003 (and not the one that was eventually released under that name) is now the first of three introductory missions. This is the most traditional type of map of the bunch, featuring solid action against the aliens from Duke3D in impressive outdoor environments with a few new features thrown in to spice things up. From the open spaces of this "Megabase" you end up on Ganymede, one of Jupiter's moons, where evil things run amok. This ("Dis Base") and the following hell map employ ambient sounds and music to create an infernal atmosphere. In Dis Base hell literally pushes its way through the base's walls. After this introductory segment (you get to play this bit with any characater you want) you're back at the AMC base. What follows is a series of character-specific levels. In the eerie and ambitious "Millhaven" Rusty is sent to investigate cult activities in a secluded canyon location. The level alternates between narrow indoor and open outdoor segments with different soundtracks to boost contrast between the two. What follows after Millhaven is my own map, "Snow Base", where you get to infiltrate an MS Corp facility that's been overrun by mercenaries, and then blast your way out in a mecha. "Revolution" is perhaps the best interpretation of a war-torn city in a Duke3D map as both Highwire and James make their way into the heart of the fascist machine, a palace that makes its surroundings pale in comparison like the would-be Volkshalle. In a fitting manner this epic tale is wrapped up by its most epic map, "For Providence", a map that involves several characters and can last anywhere from fourty minutes to more than an hour. 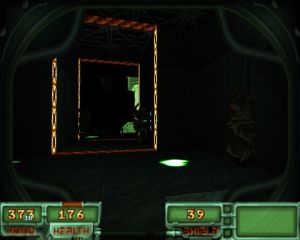 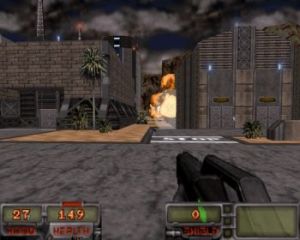 The levels benefit from well picked and timed music and sound effects. The vast majority of art is from other games and mods, but this has enabled mappers to use a wide selection of textures quickly to shape their maps to match their initial visions, or to expand those visions based on the available materials. The snow-covered industrial locations of my map are quite different from the infernal fires of "Abyss". The TC also supports Duke3D usermaps and there's an invasion mode where a character of your choice is pitted against hordes of enemies.

AMC TC has its flaws, although these are rather minor. Occasionally you may get stuck due to the open-ended layout of some of the levels or due to the sheer number of visitable locations. A new feature may catch you off guard, especially if you didn't pay attention to what you did in the (mandatory) tutorial map. Voice acting is generally as good as it can be in a project where every mapper has voiced his own character but occasionally dialog gets lost in the background. Some cutscenes may feel like they go on for too long, especially if you're playing the TC for the second time (or, as in my case, for the billionth time). But these minor issues are fleeting and you're unlikely to remember any of them by the time you're done with the TC.

Conclusion: The AMC TC has more content than many previous TCs combined; in fact, this could be argued of any single level in the TC. Taken together the levels feature a wide variety of locations and effectively utilize the TC's new features, as pretty much every level has something new to offer. But what really gives this TC its pulse are the cutscenes, the story and the background universe that are constantly present, reminding you of the big picture. This is the work of the best mappers and coders in the community, and it shows, every step of the way. 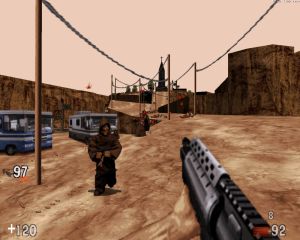 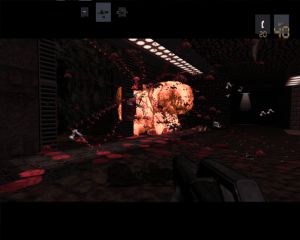 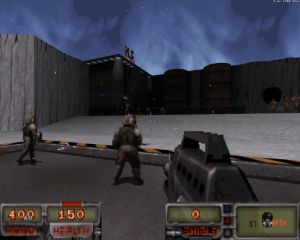 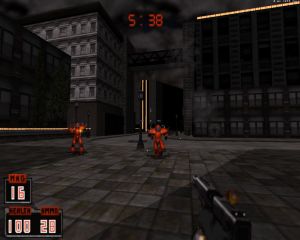