The Review: This one is all the way back from 2008; for some reason the author (who "recently" re-entered the mapping scene) never saw it fit to release the map, even though it's of a solid "Hot Map" quality. Restaurant Conspiracy borrows most of its influences from Freeway, the second secret level in Shrapnel City. (The very same secret level also recently inspired some bits in my own MSSP9, which probably explains why I felt such instant familiarity with this map's hub section.)
You start at the intersection of a "freeway" system with four paths to choose from. The start is a bit tricky as you're instantly attacked from every direction and possessing nothing but your pistol to kill enemies with. While ammo becomes more plentiful as things settle down after the rough start, health remains an issue owing largely to how cramped many of the map's segments are, particularly indoors (which in turn limits your chances to dodge enemy bullets). While I liked the overall higher challenge the map presented, navigating cramped corridors has never been among my favorite pastimes. Despite things feeling a bit stuffed at times, the map makes good use of available enemies, including some nasty Protector Drone respawns and quite a few Recon Patrol Vehicles that navigate the map's intersection system (I just wish these were more aggressive, but that's a fault with the original game).
Most of the gameplay takes place either outdoors around the intersection or within a larger Duke Burger complex that includes both the actual restaurant and its offices. There's nothing you haven't seen before, but it's all well designed with solid trimwork and texturing (neither of which seemed too constrained by the author's choice of a simple 3DR-inspired theme). A special mention goes to the map's use of 3DR-type lighting with its strong contrasts and extensive use of slopes and clear angles for shadows. You might also appreciate how several things in the map have a tendency to blow up (sometimes in your face); this is one of those features that set Duke3D apart from the likes of Doom and Quake, so why not use it?
All in all, it'd have been a damn shame if this map had never been released. There's always plenty of room for these 3DR-inspired maps as they remind us of what we love about this game in the first place, and the map's higher difficulty level should keep even the more hardened Duke veterans entertained (even if that extra challenge is not always due to good things). 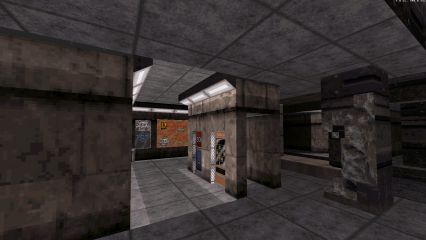 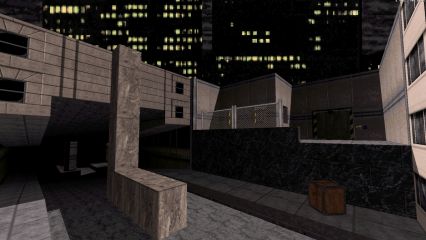