Note: This is a re-review of Warzone. Click here for the original 1999 review.

The Review: I described Warzone (or simply "Warz") back in 1999 as "like Kosova" (sic). NATO airpower saved the Kosovars from genocide in the following months, and the region declared independence in 2008. The map itself, which in 1997 pushed the limits of available technology, has remained frozen in time since then. I've given it a few replays over the years and never found it anything but impressive. The enclosed gameplay area, with its periphery patrolled by two alien tanks, is still one of the finest specimes of a city in ruins in the Build engine (a theme surprisingly never attempted in the original game; did Earth capitulate without a fight until Duke returned to Earth?). And the destruction isn't static either; you often get to witness the city's destruction in real time as you're treated to some juicy explosions throughout the map. The map's use of cracks, rubble textures and such have spawned many imitators over the years. Spritework was a hassle to work with in the pre-Mapster32 days, but this map boasts spritework for stuff such as stairs, power lines and even entire floors. And let's not forget that Warz was also one of the first notable maps to use a clear blue sky texture, which actually enhances the looks of the buildings against such a clear backdrop. Moreover, building textures are used so as to minimize repetition; not only is this visually pleasing, but it makes for easier navigation as well. And this is an area where the map truly shines; the compact but interconnected gameplay area is surprisingly simple and pleasant to navigate. There are many optional areas, and you're not required to pick two of the three keys in the map in any specific order. Some jumping is involved, but only of the kind that serves the gameplay. Monsters and items are in perfect balance. There are some nasty encounters, such as Commanders spawning in just as Duke finds himself in a delicate position, and Battlelords are a frequent guest too, but there's an abundance of ammo and health in case a battle leaves you badly scarred.

Conclusion: Warzone's interpretation of a city under siege set an example for decades to come. Not only is "Warz" always pleasant to look at with its detailing and "dynamic" destruction, its gameplay also ranks among the very top of usermaps. In fact, this is such a good map that I'm compelled to increase its 1999 score (91) by a few points. A historical note: Warz was preceded by Castle of the Damned; Andras then worked on the Critical Mass TC, but unfortunately that map is long gone along with Critical Mass (and the two multiplayer maps I designed for it) itself. 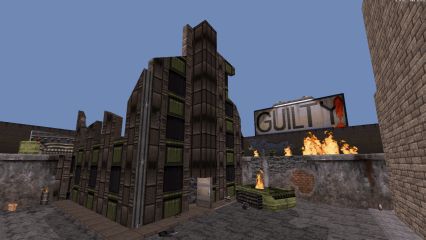 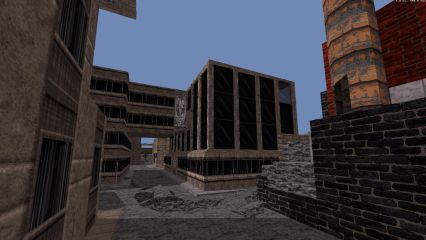