The Review: If you published a good Duke3D map back in 1996 or 1997, chances are anyone who dares call himself a Duke3D fan has played that map at least a few times over the decades. A single good map released in those early years meant you were immortalized, if only because 99% of the usermap output back in those days consisted of horrendous crap (and before the advent of usermap review sites you had to play through piles of that crap in order to find a few good ones). Andras Piroska, the author of the map being reviewed, is mostly known for his Warz, a map that reached legendary status mere months after its release. Castle of the Damned is an earlier work, predating the more polished Warz by a few months. I've come across this map a few times but am not quite sure if I ever played through it entirely; maybe it was just the theme that put me off a little bit, but here we are, more than twenty years later, about to scratch it off my list.
The map itself is still pretty good and indicative of Piroska's mapping talent. The first outdoor area with its mixture of brown canyon textures and trees and green slime against a hellish sky is still an outstanding sight. The castle itself features quite a few locations, including plenty of vertical action, and never gets repetivive, but its design doesn't quite reach the heights of the first outdoor area. For one, lighting could be more "dramatic" and less bland. But it's really the gameplay that shines in the second half of the map. Andras makes good use of several Build effects, including respawning fire and a rarely used rotating platform effect. The map is not a pushover challenge-wise either; I actually managed to get myself killed a few times, a rare "feat" these days. It's not always clear where you should be going, but nothing of importance is hidden from the player, so just keep looking if you find yourself lost.
All in all, Castle of the Damned is still a rock-solid map and good fun for almost 20 minutes. 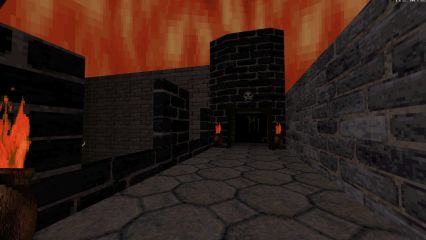 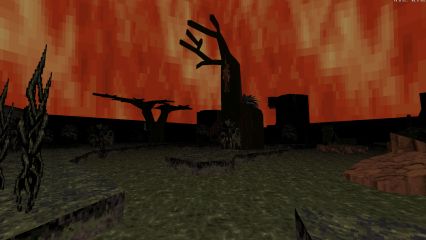