The Review: Paul Bolduc, a long-time Polymer/TROR (true room-over-room) specialist, is back after a six-year break following the release of his previous map, The Rock.
Polymer releases have been marred by performance issues, so if you're like me and playing the map on hardware that's perfectly capable of running Cyberpunk 2077 on ultra settings but still find yourself getting less than 20 frames a second in this map, just turn Polymer off and go for Polymost; there'll be a few minor graphical glitches, but they're barely noticeable and at least you'll get a smooth 144 framerate experience with TROR effects (just make sure you have a relatively recent version of EDuke32).

Design: The map takes places in an office complex specializing in who knows what. Apparently it's based on a real-life location. That shows, as the map's architecture makes practical and capable use of TROR, which is there not to show off but to make the map closer to its real-life counterpart; it'd take someone knowledgeable of the engine to even notice the extensive but mostly subtle use of the feature. Well worth it, if you can play at a decent framerate. I also liked the polished, clean texturing of the map's first half, marking a clear departure from the gloomy looks of Paul's previous maps. The grand reception area and the building's exteriors stand out for their realistic detailing and overall polished visual style, as do the several vehicles scattered around the map. The map also has a cool-ish intro where you drive along a road, passing by a never-ending stream of buildings. The effect isn't really seamless, but a nice try nevertheless and a cool way of setting the stage.

Gameplay: Gonna tell you right off the bat that the gamelay wasn't really my cup of tea. I played the map twice with about a week between the playthroughs. On both occasions I found myself hitting space on walls, paintings, computer monitors and whatnot in the hope of finding something. The first half with the offices and cubicles was a pain to navigate because of the abundance of locked doors everywhere. Granted, there are hints, but I still found myself constantly running into obstacles, which reminded me of some of Zaxtor's worst offenses. I was also thrown off by the simultaneous existence, often side by side, of breakable and unbreakable glasses, and on both tries it seemed to take forever to find where to shove the red key. All this felt like length-padding rather than a good way of presenting the player with puzzles to solve, but someone else may look at it differently.
Combat is fine and the map isn't so generous with health that you can just keep running head-first into battle without considering the use of cover, which is a tactical aspect I liked. As a nice surprise there's also a new enemy that appears near the end of the map. However, my first playthrough was marred by sluggish performance (I went for Polymost only on my second playthrough, as the author recommends against using the renderer) that only made some of the map's close-quarters battles more annoying. I also have no idea what I did differently on my second start, as I quickly found myself with nothing to kill enemies with and had to run around looking for ammo while jumping over aliens. At least the map has a good soundtrack to keep your spirits from dropping too low.

Conclusion: Paul Bolduc has produced another technically impressive TROR-centric map, and thanks to recent advances in the development of Polymost (fuelled by the success of Ion Fury) it's finally playable with an excellent framerate. Design-wise The Division is top-notch, making practical use of TROR in going for its realistic architecture. But after 30 minutes of what felt like pushing walls and checking viewscreens to see what I might have missed, I can't say the map left a very positive impression on me. At least you have a good soundtrack to jam to while looking for a way out. 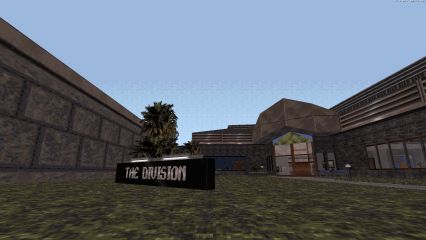 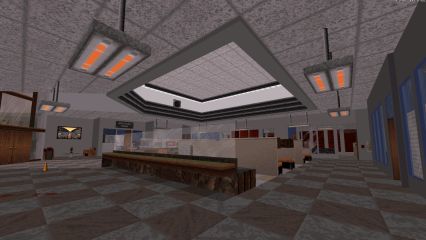