The Review: Alex Pistol recently reappeared on the scene with Back in Business, in the making for almost two decades. Submachine too had been in development since 2008, until it was finally released a week back or so. This one is an underground EDF research base; not exactly the most original premise for a map, but there you have it.
Alex's knack for intricate detailing is just as present here as it was in Back in Business, the only difference (and a rather significant one) is that Submachine isn't anywhere near as painful an experience as Back in Business was, which was plagued by combat that just didn't sit well with how teeming the maps were with details that had a nasty habit of getting in your way. To be sure, there are plenty of narrow corridors and tiny rooms with tons of details in them in Submachine too, but not only is the allocation of monsters much more thought-out (save for a few slight annoyances) than it was Back in Business, it also felt like the cramped sections were better counterbalanced by the map's several larger areas.
Anyway, that knack for detailing is such that you're bound to come across some cool gadget or a computer panel in every section, and there's a ton of innovative stuff in the map as well, including an optional sidequest and, more controversially, a section where you need to guide a red key through a conveyor belt with several turns and hatches blocking the key's way. The latter is really well done considering the technical challenges involved, but there's a lot of potential for frustration for those who don't savescum their way through it (i.e., make a quicksave after every successful action).
With plenty of paths in sight but most of them behind locks and impossible button combinations, the map may at first seem filled with puzzles, but it's essentially nothing more than a bit-by-bit hunt for buttons and keys; you just need to pay attention to viewscreens, signs and the various messages you come across. It's all fair and balanced, as basically every button the map is labeled, but the sheer amount of paths, locked doors, buttons and keys is bound to throw you off every now and then. Just relax and retrace your steps whenever you find yourself stuck. And while this is another map that ends with a rather simple boss battle, the map makes up for it by having a cool setting for it; and pay attention to that sidequest, as it may come in handy right here.

Conclusion: Considering the pitfalls of Back in Business, there was a lot of potential for Submachine to turn out equally frustrating. However, Submachine demonstrates what you can achieve simply by putting some thought into monster placement. As monsters don't get in your way, you're mentally better equipped to appreciate the great things about the map, namely its intricate detailing and innovative use of the engine's tricks, even if all that takes place in a rather generic setting. 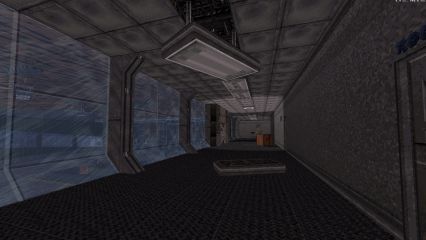 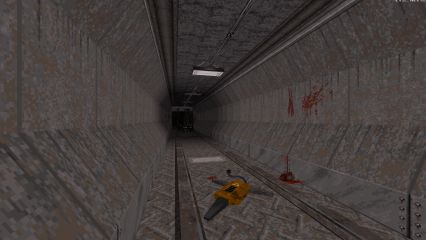