The Review: This is another level that kicks off with that E2L2 type of sequence, only this time you're on a train approaching a station. The railway station itself has plenty of cool details to look at, particularly all the wiring above your head (which is probably why they're called "overhead lines"). For about 20 seconds into the map and still inside one of the train cars, I was getting kinda nervous this was going to be another painfully cramped map, but as soon as you step outside the car the map opens up. Overall there's plenty of space for combat and walking around, and I liked all the overhead detailing as well. In addition to the railway station there's also a post office with a processing and distribution center that fittingly connects with the station. There are several noteworthy details, but what stood out for me was a control room with a map of the rail network; not the first of its kind in a Duke3D map as far as I can remember, but a cool sight nevertheless. The author also has a knack for spritework and making detailed vehicles (including an armored military vehicle). There are some story elements as well; nothing big really, but it's always cool to come across something you read about in the readme.
As for the negatives, lighting in general is much too bland no matter where you go; there's a lot of room for improvement in this department. Besides that, there isn't much to complain about. Gameplay starts off slow with sporadic monster encounters, but the pace picks up in the second half. Not that I mind this type of combat, but I wouldn't have minded a bit more lively first half, if even with better use of effects rather than cramming more aliens into it.
The ending has a few nice twists that I'll let you discover on your own. Also check out the author's previous map, Duke Express. 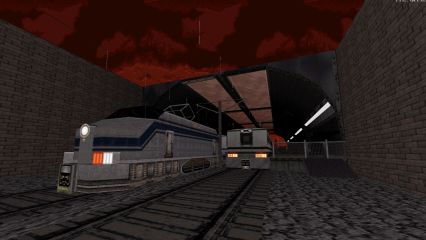 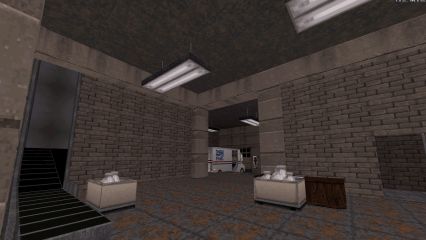