The Review: The aliens appear to have stolen the Planet Express ship, probably killing the entire crew in the process. For whatever reason not explained in the readme, Duke must get inside the ship, kill everything inside, then leave. And thus is the first Duke3D map based on Futurama, the series that for some reason had to be cancelled while The Simpsons, which "jumped the shark" more than 20 years ago, is still allowed to exist.
The map is divided into two parts. First you've got the starport where the ship is docked. This bit (which is less than a third of the map) consists of spacious hallways and rooms that bear some resemblance to Loke's maps with their elegant corridor design consisting of curves and seamless trimwork. The map takes quite a turn as you get inside the Planet Express. Here the corridors are cramped, there are a zillion ways to go and locked doors everywhere. It's initially quite difficult to navigate but gets easier as you slowly learn the ship's multi-deck layout. There's some joy in discovering everything the ship's got to offer, but ultimately you end up spending way too much time going from door to door hoping to find one that's unlocked (and there's one nasty door that's openable only if you're facing it at a certain angle, a quirk of the engine). There are plenty of details inside the ship, ranging from washing machines to microscopes (I was again reminded of another map by Loke). Sometimes the details have a habit of getting in the way, but I was quite surprised that fighting the enemy within these cramped hallways didn't turn out to be as off-putting as I had feared.
While the map's presentation is rather excellent - a spaceport with a nice view of the Planet Express which you'll get to explore - its overall impression felt slightly static. Lighting is a bit bland and the environment could have had more moving parts, lighting effects, ambient sounds and maybe a few scripted sequences to better bring the environment alive. As a case in point, when you see a locked door labeled "Escape Pod" with a nukebutton behind it, you anticipate an epic escape sequence rather than the bland ending you end up served with.

Conclusion: The map is not without its flaws; from the confusing, cramped layout of the ship's interiors to its somewhat static overall impression, there's a lot of room for improvement. However, this is still a beautifully designed map that manages to rise above the generic mishmash of space maps. Its unique setting provides a further boost to its appeal, especially if the prospect of exploring the Planet Express tickles you. While exploring the ship, the player can tell the author has put a ton of hard work into its every inch. 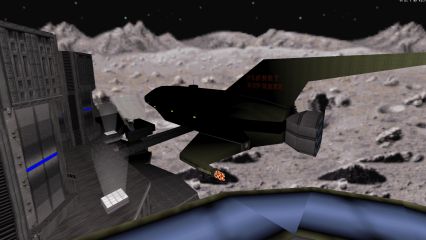 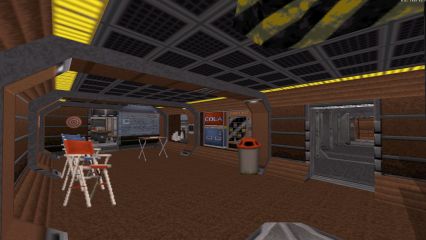