The Review: Rosario 3 is a city-themed usermap for Alien Armageddon; just make sure to have the latest version of the mod before you play. The map's design is good with colorful and vibrant streets filled with signs, utility poles and the like; there's even a water tower - a rare sight in a Duke3D map - and a view of a beach with some boats in there. No building looks alike and the map makes full use of AA's rich assets. No surprise the streets and the buildings surrounding them were inspired by a real-life location.
Gameplay is a bit so so. Alien Armageddon is quite spammy (like all of DeeperThought's mods), so the action is constant and loud. Also, due to the "new" weapons and enemies I wasn't on top of my game, but that's understandable and part of the appeal. It can be a lot of fun, I just wish the player was given a bit of a reprieve from all the action every now and then. The readme makes no mention of whether the map is intended to accommodate Bombshell as well; without her the map gets very tough in a few spots especially near the end, but some of the corridors are so cramped, especially with all the monster spam going on, that it feels like more thought should've been put into designing them for two players.
The map has a few other recurring annoyances in addition to the occasional crampedness. Elevators cannot be called back from the ground level once you've taken them up once, forcing you to resort to dnclipping if you miss something on your first trip up. I also never found the blue key on my first (Bombshell-less) playthrough, which caused some pain and bad memories. Then you'll come across a few obnoxious invisible blocking walls. I spent some minutes trying to reach places that appeared to be within reach but turned out to have been sealed off intentionally, only with invisible walls. The final battle area is the worst offender in this respect by far, as there you can't even throw pipebombs over the invisible barrier surrounding the area. This last place is a mess in general. After making your way around its very narrow surroundings, you're expected to drop into the arena itself, triggering a whole bunch of deadly enemy respawns, dropping your life expectancy to just a few seconds. I ended up cheesing the whole part by triggering the enemies without entering the arena itself, but it was still a tedious experience (especially in the non-patched version where a nasty window kept shutting on me).
Keep in mind that you can upgrade your weapons and especially shields; the latter in particular are vital, for otherwise you're gonna have a bad time.

Conclusion: I found Rosario 3 both refreshing and disorienting. Alien Armageddon is at its best in small bursts, but with map length approaching or exceeding 30 minutes and the monster count at over 400, the experience starts to wear you down. Overall it's a well designed map with some notable annoyances, and a lot of your enjoyment of it hangs on your opinion of Alien Armageddon in general. 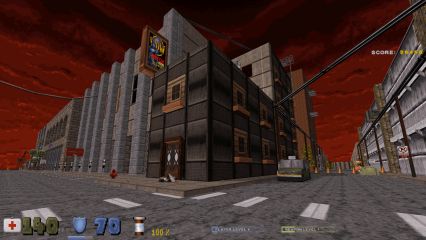 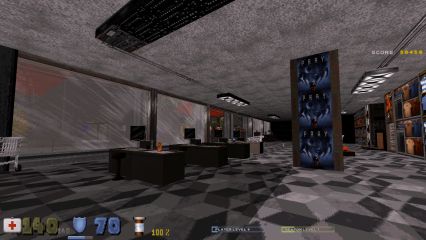