The Review: As the name implies, this is a remake of E3L2/Bank Roll. The layout is very similar but there are several new areas, including a grocery store and a nudie bar. The new additions serve the remake well and make its gameplay more interesting, but even the familiar areas have revamped, modernized looks and more ambitious architecture while still making a good use of the kind of lighting the old maps relied on. Moreover, in an interesting contrast to Arzca's X3 Studios, Bank Roll 2000 is very generous with space, providing tons of room to move around. There's still quite a bit of challenge though, especially with some Sentry Drone and Battlelord respawns later on in the map, and ammo remains somewhat scarce throughout. (Apparently there is a chaingun somewhere but I never came across it, not even on my second playthrough, and Enforcers seemed reluctant to drop it.) Once again, this is not a complaint but merely a statement of facts. Explorers are rewarded, and knowledge of secrets in the old Bank Roll should help you a little bit here. In any case, this is a well-made, worthy remake, the kind I'd love to see more of. 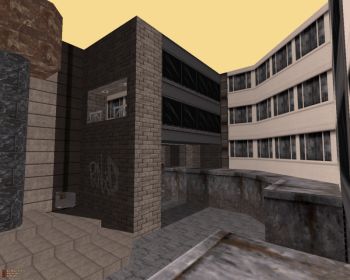