The Review: MRCK has abandoned his mortal body in favor of becoming a map-making machine, churning out usermaps all the while working on AWOL and his own 14-map episode, Blast Radius (due for a release later this year). Red Light Rumble, like its two predecessors, is on the experimental side of things, but this one is the most "grounded" of the "wacky trilogy". It's inspired by Red Light District and LA Rumble, although to an outside observer the only thing the map seems to share with these is an adult book store and some tall buildings. There are some "neo noir" elements (this is the "wacky" part) that seemed especially pronounced all over the street area, but these are counterbalanced by the map's more conservative indoor segments, as if the two spaces are from different worlds. While some areas seemed a bit sloppy (like the long alley with nothing but babes and barrels in it), the futuristic club - with its epic views of the streets below - and the film studio were quite pleasing to the eye with their visuals that felt original without going overboard. And the Pig Cops seem to have arrived en masse, leaving the streets filled with squad cars that were a mix of the familiar and the weird.
But as is all too typical of MRCK's recent maps, the gameplay suffers from some annoyances that just won't go away. Indoor combat is quite fun and balanced (there are plenty of Pig Cops, which is to my liking), but the big open street area has too many aliens shooting crap your way. There's cover, as the streets are littered with said squad cars, but the game just doesn't work well with these mass encounters involving many hitscan enemies in open areas. Also, a few Commanders pop in as well, but depending on your your particular route, they may end up lingering in the uppear reaches of the map until announcing their presence by hitting you with a rocket. The last area (which you can actually reach right from the start in case you're into speedrunning) opens up with an even bigger battle, but I just zipped past the aliens using steroids to hit the Nukebutton. (It also took me 10 minutes to find the blue key, but that was on me, as I had missed a rather obvious clue.) The map comes with a new midi, but this one I just had to turn off, as it just seemed to aggravate me.

Conclusion: Turnpike indicated that sloppy design has its limits, so it's a good thing that Red Light Rumble is a step toward normalcy (but without kissing creativity goodbye). Too bad a lot of the map's combat is of the tedious variety then. With a map inspired by LA Rumble (actually my favorite map in the original game), I'd have hoped for more atmosphere and less shooting. 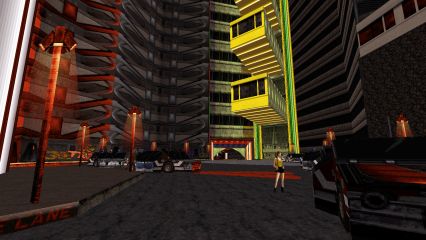 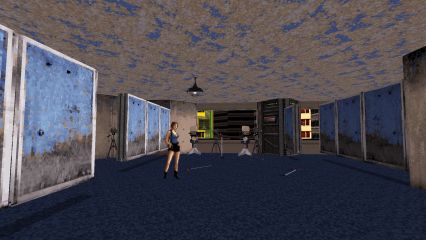