The Review: A week ago I reviewed Day of Night from the same author. That map was from this February, so Magdalene, released this week, should be a good measure of how far the author has come since then. Perhaps the biggest problem with Day of Night was the very tight scale of its rooms and hallways, a problem that was only exacerbated by the large number of monsters the map had to offer. Magdalene is noticeably more spacious, making for a more pleasant gameplay experience, but it's still pretty cramped by any objective standard. If I were to consider the map in isolation I'd probably have more trouble with its scale, but now my perspective is affected by having just played the even more claustrophobic Day of Night. Toning down the number of monsters would further alleviate the problem at least a little bit; there are still way too many of these.
Another problem with Day of Night was the excessive amount of fancy puzzles that ended up being rather irritating. Aside from a stupid trial-and-error oriented puzzle dealing with spinning gears, the puzzles in Magdalene aren't as bad; in fact, some of them were quite clever by just the right amount, especially one involving a shrunken babe and another a Barrels-o'-Fun type of a sticky situation. There's also the compulsory math-related puzzle, but it was relatively fun this time around (at least if we look past the fact that there are four mathematically correct solutions to the problem, but the author accepts only one of these). The core gameplay could use more work still; while it's not very difficult to find your way around the map, too much of it consists of chasing buttons, then figuring out which locked door (of which there are a million) is now open. Magdalene does succeed in avoiding repetition with respect to its use of the urban theme. In addition to apartments and street areas, there is an industrial section and a refreshingly large underwater section. (Duke doesn't really have the best underwater combat, but the section is still a nice change of pace.)
As was already clear in Day of Night, the author knows how to make a good-looking map. Magdalene is solidly designed with good texturing, lighting and polish all around, but at the same time there isn't anything particularly eye-catching. If the author were to adopt a larger scale for his next map, that might leave more room for interesting architecture and less opportunities to rely on design that's best described as "safe and sound". Another thing worth noting is how similar the street areas are to their brethren in Day of Night. The city has a nice gloomy look with rain pouring down on you (albeit with no sound), but the player is surrounded by a tight mass of equally tall (or small) buildings in all directions, which is an easy way to break any illusion of being in a city that's larger than the gameplay area.

Conclusion: While it wasn't too difficult to find many things wrong with the map, Magdalene is a noticeably improvement over its non-immediate predecessor. Still, DannyFromNewOrleans needs to work more on getting the scale right from the getgo, and gameplay would greatly benefit from a less button-oriented approach. On balance the map is fun to play and never really allows its shortcomings to turn into a nagging problem, which couldn't be said of Day of Night. 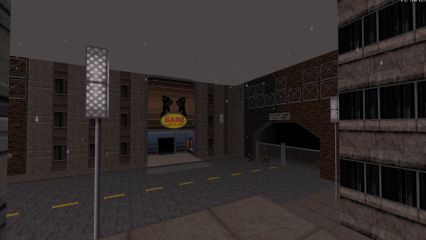 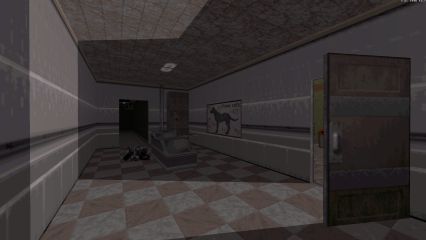