The Review: The last map in Michael_Hunt's 2021 episode, Luna One is a city on the Moon. Now, the first thing that springs to my mind is of course the New LA map in Last Reaction (and the many maps influenced by it, including my own MSSP9), but I don't know if the author is at all familiar with the theme, so he may have come up with the Lunar city concept on his own. In any case, maps utilizing this particular theme are always more than welcome, giving a nice spin to otherwise standard city maps. Luna One is divided into three sectors, including two city "districts", connected by a subway system. Most buildings are enterable, although some only feature the lobby and a bunch of locked doors (of which there are way too many spread across the map). Design is very tidy and organized with heavy emphasis on neat texturing and strong lighting that never ceases to impress. There are also some nice views of the Lunar surface with solar panels & such (and a visit to a cool penthouse not unlike the one in, well, Penthouse), but overall the physical environment could have been exploited a lot better with maybe a visit to the Lunar surface every now and then, as now you could easily turn this into a regular city map by swapping just a few textures - but you could probably say that of all "new LA" maps. The subway rides also could have used more awe-inspiring sights along the route. Gameplay is pretty standard; you open doors, look for keys and buttons and kill plenty of aliens in between. There are a few spots where the going gets rather tough - I had a few Battlelords chase me at one point, a nice switch from them being merely a stationary target for the player's rockets - but you should always have more than enough tools of destruction at your disposal. The ending was a rather lame rehash of Overlord (E2L9) though; some setpiece here could've wrapped up the episode in a more satisfying manner.

Conclusion: Luna One is well-designed "space city" map with impressive street areas and strong lighting in particular. It's fun to play and ultimately the second best map in the episode, but the map could have made more use out its theme and the finale is rather disappointing. Still, a must-have for all the city/space map fans out there. 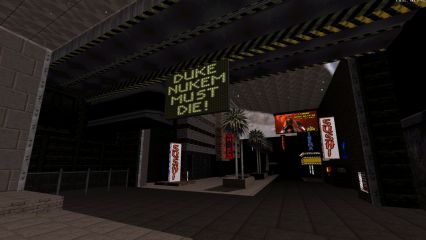 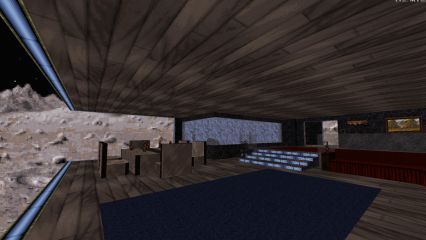