The Review: Come to think of it, the Duke3D mapping scene has seen very few remakes of the original maps over the years. I'd like to think this is mostly because, unlike original maps in, say, Doom, Duke3D maps are perfect just the way they are and not in need of a remake. In any case, here's a remake of Launch Facility, the sole secret level in LA Meltdown. It's a bit of an odd choice for a remake, as I doubt it's a common sight on any favorite maps lists. But hey, it's only good that even the least popular maps get some love every now and then.
Coming from the author of Fallout Freeze, the map's design is in the top 5% with texturing and spritework being no less than absolutely stunning. The skill and care with which Duke3D's stock assets have been put to use here are a cause for several stoppages, as you find yourself scratching your head, thinking how the author managed to pull off all the "Build porn" being presented to you at every turn. And it's not just the intricate, as there are quite a few eye-catching details too, including a detailed army tank and an inventive visual effect involving the map's horizon. Work on the facility's exteriors is noticeable as well (even if there were some TROR glitches); we're a long way from the flat, uni-textured wall of the original E1L6.
As for the map's merits as a remake, it's instantly recognizable as such, but this isn't one of those remakes that strictly (and often detrimentally) preserve the layout of the original; quite a few liberties have been taken to fill the spaces between the main areas. I'd strongly recommend to run through the original after having played the remake, just to get a good perspecive on things. Gameplay-wise the map is pretty standard, although it's pretty low on the monster count and consequently doesn't feel very engaging - at least not until the last few minutes or so. There were also way too many fake doors; my first playthrough was on a relatively old laptop, so I wasn't sure if the game was lagging when I was trying to interact with doors or if they were never meant to open in the first place. As a result I was constantly feeling like I was leaving unexplored areas behind. Navigation wasn't really a problem, but I'm not sure what to make of all the Russian signs above doors. There's a cool new music track, but I feel like its tone calls for a bit more lively and action-oriented gameplay.

Conclusion: An interesting and extremely well-detailed remake of Launch Facility; unfortunately its gameplay is lackluster in comparison.

Rating: - (score withheld until I get to play this on my own computer; my outdoor framerate was below 10) 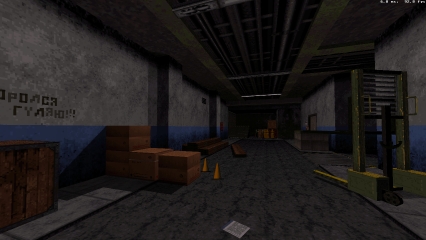 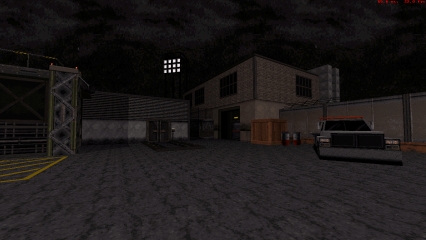