The Review: Koodbool is a tad more conventional in design than MRCK's previous "speedmaps", but it still relies on some notable oddities. For example, the background skyline uses the 2D LA skybox art for 3d buildings. The results fit and arouse curiosity, but I wouldn't want this to become a thing in maps grounded in realism, as the results are highly abstract. The gameplay starts off pretty well. You won't immediately get your hands on the shotgun & chaingun, having to rely on pipebombs & the pistol instead. That might sound annoying, but at least the first building you're meant to enter (but might not) is quite accommodating to the use of these weapons. Gameplay then takes a nosedive the second you step on a few triggers along the way to respawn a whole bunch of enemies. The rest of the map then becomes a chore. The open street area and its peripheries (where almost all of the action takes place) don't really have a lot of cover, and your enemies tend to attack from above and afar anyway so as to render cover useless. In the final stages Battlelords appear out in the open, and you need to grab a key card from next to them (placed on a sloped surface so as to make grabbing it tricky in itself because of the way the engine works). On my 1st playthrough I was short on health, then short on RPG/Devastator ammo on my 2nd playthrough. There probably were still plenty left in the corners of the map, but the amount of stragglers is such that you risk running into more trouble when trying to get out of one. Sometimes an opportunity arises to deal with a whole bunch of enemies at once, but other times they can be so spread out that it becomes a chore especially when there are only two long-range weapons (the pistol & expander) in the game. And even then you're likely to have stragglers left in the farthest corners of the gameplay area, hard to see against the pixelated backgrounds but more than happy to hit you when you least expect it. Furthermore, the icy lake area is kinda annoying to navigate, consisting of slippery sections (which both look clunky and serve no other gameplay purpose but to annoy the player) and toxic waste. So yeah, I did not have much fun. But there are positives worth mentioning: The first building is fun to fight through, the map occasionally makes good use of verticality, the street lamps and the sleigh look nice, and the map ends on a high note with a gigantic tunnel aiding your escape from the chaos. There's also one breaking-of-the-4th-wall sequence, although gameplay-wise it may throw some players off.

Conclusion: Koodbool is another "interesting" map from its author. There's creativity in it, it's an all-around well-designed map with plenty of interesting visual details, but its gameplay suffers from the same annoyances related to outdoor combat as Siebenpolis and Red Light Rumble. Worth playing for sure and some may even love it, but I was much too annoyed to enjoy it. 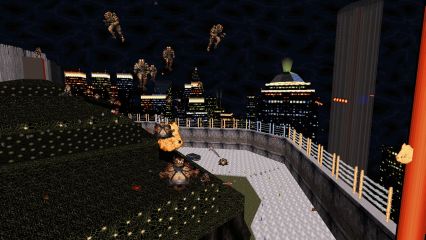 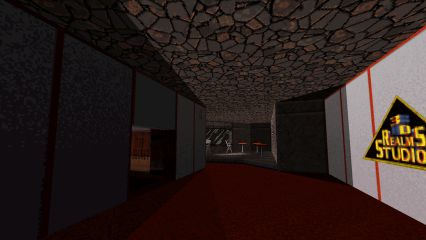