Description: UnderTaker is back, picking up where he left off with Border Town six years ago. Duke finds himself rummaging through a facility that houses a teleporter with its destinations spread across a city. Blink of an Eye also wraps up the series underTaker started with Forever and One More Day all the way back in 2012.

Into It: The first segment of the map - consisting roughly of a hi-tech area replete with narrow, dark corridors and a brewery - is a slog to play through. The hi-tech part is really dark; I had to adjust my in-game brightness settings to see more than just jack shit. To add insult to injury, there are quite a few bits with various hurtfloor tiles, which makes the segment all the more irritating. The going gets better as you reach the brewery, an area that is brighter and more open. Still, I wasn't quite sure what I was doing there: the "logic" of the map opens up bit by bit (and turns out to be a button hunt).
The map then starts to expand into a larger city segment with plenty of both indoor and outdoor areas. Darkness continues being a nagging issue and the "F11" solution to it yields washed-out colors as a tradeoff. In general, the expansive nature of the map is one of those double-edged swords. On the one hand you're having fun discovering new areas: this is one of those maps where you don't really know where you're supposed to be going, but the map always seems to take you at least somewhere (often back to an earlier section; the map is very interconnected). But the obvious downside is that you're always more than just a bit confused, especially since there's no clear "center". Often this leads to some weird situations, like once I was looking for a door to unlock with a red key I had just obtained, but when I found the door it just took me back to a section I had already gone through. The issue is exacerbated by the sheer abundance of buttons and the fact that it's often unclear what they do; quite frankly, it should always be obvious what a given button does.
As for combat, health and ammo become quite abundant after a while. The monster count is quite heavy at nearly 1000 (!), but the ending had probably several hundred eggs. Still, aliens are a constant presence throughout the map, but never to the degree that combat would have started to wear me down. Low visibility (the unrealistic "shroud" that engulfs distant geometry in old shooters) did occasionally lead to getting shot from a mile away by monsters apparently unaffected by said visibility, but combat was mostly a strong aspect of the map with plenty of gear to kill your enemies with.

Conclusion: The map has a rough start with way too many annoyances. Some of these, namely the nagging darkness and the occasionally perplexing button hunting, persist all the way through. The map's expansive nature is for those who love exploration, and at its best the map has an enjoyable flow to it, but that might depend on how often you get stuck. The map is often hard to like, but I can't dispute its merits, and at 70 minutes in length it sure has commendable size. 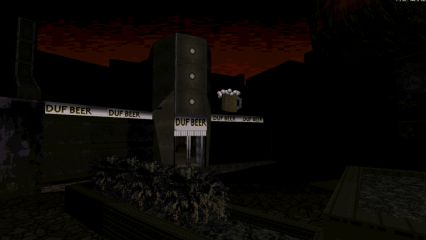 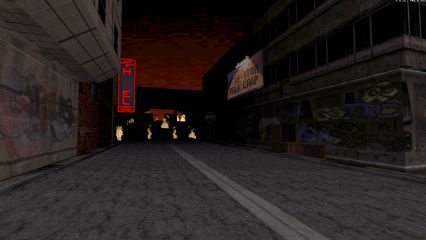